 An Olympic performance that won the public’s heart - The Post 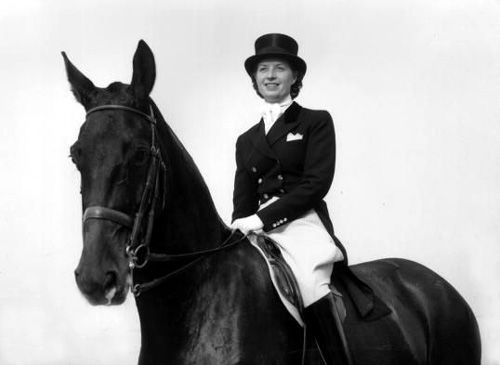 With the 2016 Olympic Games in Rio in full vigor, the Copenhagen Post looks back at one of the most memorable medals in Danish history.

If the Olympics are about dedication and perseverance, horse rider Lis Hartel deserves to have taken the gold: having overcome the polio that left her crippled, she brought spectators to tears at the 1952 Olympics with her silver-medal performance

The nation of Denmark has experienced some memorable moments in Olympic history that have given its citizens something to weep tears of joy over. Among them, a third successive gold medal win in Women’s Handball at the 2004 Olympiad in Athens. Imagine the amount of tissues then that were needed to wipe the eyes of the county in 1952, when a woman no one believed would be able to compete again rode her way to silver. Her name was Lis Hartel, and her tale of triumph over adversity and a stubborn refusal to give up touched the nation.

Horsing it in Hellerup
There was nothing particularly special or unfortunate about Lis Hartel’s childhood, growing up in the well-to-do Copenhagen suburb of Hellerup. Born in 1921, like many girls, she and her sister Tove spent much of their early years around horses, being taught to ride by their mother. And while for many, the interest dwindles throughout adolescence, usually traded for an interest in boys, young Lis met a man who shared her love of horses, and they married when she was just 20. By that time, her riding career was already well underway, having participated in both show jumping and dressage competitions at Copenhagen’s Sports Riding Club since 1934.

It seemed nothing could keep Hartel out of the saddle: neither her marriage nor the birth of her first daughter, Pernille, in 1942. She won her first Danish Championship in dressage in 1943, an honour she repeated the following year. But tragedy was just around the corner: whilst carrying her second child, Anne (born in 1945), she was struck with the life-threatening disease polio, which at that time was still common, particularly amongst children. Although she survived the illness, she was left terribly crippled and walked only with difficulty. No one imagined, then, that she might be able to resume her former riding career. It took an immense strength of character and willpower to do so, but, three years later, Lis Hartel was back holding the reins.

From 1951, Hartel was coached through her paces by legendary trainer Gunnar Andersen, a fellow Dane, who can also be credited with her entrance at the Olympic Games in Helsinki in 1952. Even without her handicap, Lis Hartel was making history, this being the first year ever that the Olympic Committee had allowed women entrants to participate in horse riding competitions. In a category previously restricted to officers and gentlemen, men and women were now permitted to compete alongside one another, and Hartel’s second place finish on her horse Jubilee was nothing more than sensational. For those watching at home in Denmark, she had taken first place in their hearts.

Jubilant on Jubilee
Although the 1952 Olympics were undoubtedly a high point, Lis Hartel’s riding career was far from over. She repeated her silver medal-winning Olympic performance in 1956, again on Jubilee, who helped Hartel win three consecutive Danish Championship titles between 1952 and 1954, and again in 1956. It was on another horse, Limelight, that she won her last Danish Championship title in 1959.

Lis Hartel continued to ride in competitions for another decade, although her performance level gradually declined. Even after she stopped entering competitions, she still helped to train young riders, such as Nils Haagensen, whose participation in the 2000 Sydney Olympics was cut short by an injury sustained during the completion.

Outside competitive sports, Hartel’s achievements have meant a great deal to other polio survivors, and through the Polio Foundation she has talked publicly all over the world. In Holland, a riding school for the disabled has been named in her honour. In 1994, she became the first Scandinavian to be included in the International Women’s Sports Hall of Fame.