 Karen Blixen: twice the Nobel bridesmaid, but never the bride - The Post 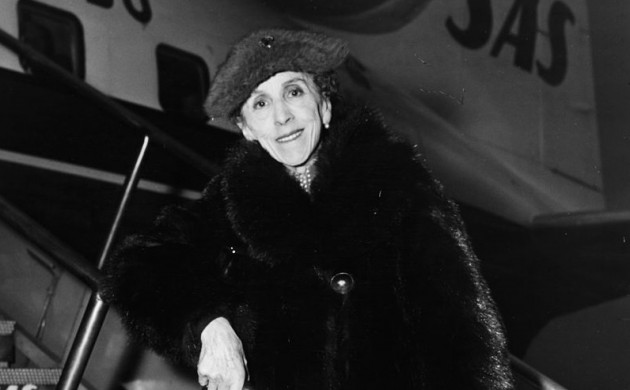 Some say the academy was ageist and that cost the elderly Blixen (photo: SAS)
September 20th, 2016 8:01 pm| by Michael de Laine

The released archives of the Swedish Academy, the ‘Prize Awarder for the Nobel Prize in Literature’, revealed in 2007 that Danish author Karen Blixen was one of the top four candidates for the 1957 prize.

That year’s prize went to French writer Albert Camus, and Boris Pasternak and André Malraux were the other shortlisted authors.

Blixen (1885-1962), who wrote under the pseudonym Isak Dinesen, was also nominated for the 1954 Nobel Prize won by Ernest Hemingway.

Too old ?
The author of ‘Out of Africa’, ‘Seven Gothic Tales’, ‘Babette’s Feast’ and a host of other books and stories was long considered by Danish and international literature experts to be a worthy addition to the select list of Danish writers who have won the Nobel Prize for literature – Johannes V Jensen, Karl Gjellerup and Henrik Pontoppidan – but it was not to be.

Blixen died in 1962, and Nobel Prizes are not awarded posthumously. Many contend that at the time the academy was biased against ageing candidates.

Karen Blixen was born on 17 April 1885 at Rungstedlund, the Dinesen family estate north of Copenhagen.

Her first short stories were published in magazines in 1907 and 1909. Blixen’s first book, ‘Seven Gothic Tales’, was published in the US in 1934 and became a huge success. However, it is her memoir of her coffee farm adventures, ‘Out of Africa’ (1938), which made her name known around the world.

Coming to coffee
In 1914, Blixen married the Swedish baron Bror von Blixen-Finecke (1886-1946), a second cousin. Together they travelled to east Africa, where they started a pioneer coffee plantation near Nairobi.

The Karen Coffee Corporation was established in 1916 and the couple bought a second, larger coffee farm on the western side of the Rift Valley. The first farm was expanded.

Gaining a separation from Bror in 1921, Karen Blixen took over the management of the coffee farm with the help of her brother, Thomas (1892-1979), only to see the coffee factory burn down in 1923. Thomas then left Karen completely in charge of the farm.

Return in Denmark
Finch Hatton started to live at her house in 1924 during his infrequent trips to Nairobi, and she was officially divorced from Bror the following year, after which she returned to Denmark for 12 months.

Blixen and Finch Hatton saw more and more of each other as he used her home as a base for his safaris from 1926, and she took her first trip in his aircraft in 1930.

That same year the worldwide depression hit the coffee farm, which Karen sold to a Nairobi businessman in March 1931 after 17 years of losses, partly caused by the unpredictable climate, which made growing coffee an uncertain business. Distraught by the news of Hatton’s death in a plane crash that May, Karen returned to Denmark in 1931 to live at Rungstedlund again.

She concentrated more and more on her writing, and ‘Seven Gothic Tales’ (written under the Isak Dinesen pseudonym) was published in 1934 and ‘Out of Africa’ in 1937-38 under her own name.

Finally a win
Just under half a century later, the book was made into a film by Sydney Pollack (1985), and it was perhaps fitting that this adaptation of her work (starring Meryl Steep as Blixen and Robert Redford as Hatton, an American in the film) went on to win the Best Film Oscar award, an honour that is arguably just as prestigious as a Nobel Prize.

Also filmed were ‘Babette’s Feast’ (Gabriel Axel, 1987), which won the Best Foreign Language Film Oscar, and ‘The Immortal Story’ (Orson Welles, 1968). The former is about a chef who spends a lottery prize on preparing a final, spectacular gourmet meal. While the latter, the story of an elderly man who tries to buy youth, caught the eye of Orson Welles, a great admirer of Blixen’s work and life.

During the Second World War, when Denmark was occupied by the Germans, Blixen started her only full-length novel, ‘The Angelic Avengers’. The horrors experienced by the young heroines in the introspective story have been interpreted as an allegory of Nazism. Written under another pseudonym, Pierre Andrezel, it was published in 1944.

One of the best
Blixen continued to write, in both English and Danish, until her death at Rungstedlund on 7 September 1962.

As a writer, Karen Blixen was formed by her Scandinavian roots and influenced by a broad spectrum of European literature. She concentrated on the story rather than the characters, on the philosophical understanding of personal identity, and on the role of fate controlling the lives of human beings.

Avoiding mainstream Danish culture, Blixen nurtured her public image as a charismatic, mysterious and insightful old baroness. She became an inspiring figure, and a Danish opinion poll in 2007 characterised her as one of the most representative personalities in Danish history.

Karen Blixen was widely respected by her contemporaries, such as Ernest Hemingway and Truman Capote. She toured the US in 1959, meeting with a number of writers, including Arthur Miller, E E Cummings and Pearl Buck.