 King Erik: the only Danish king to be buried abroad, but where in Cyprus is his body? - The Post 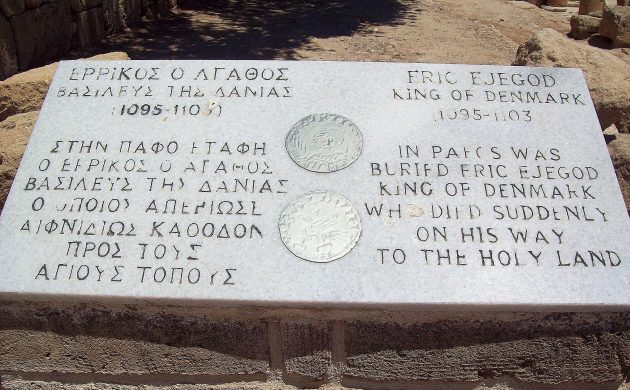 One of Denmark’s most beloved monarchs, crusader King Erik Ejegod (Erik the Good), died in Paphos in southwest Cyprus 914 years ago this summer. Historians still disagree about the exact location of the king’s grave. But the fact that he died in Paphos on his way to the Holy Land is not contested.

Born in Slangerup northwest of Copenhagen in 1056, Erik succeeded his brother Oluf Hunger in 1095. A much-loved monarch, Erik the Good, the 24th great-great grandfather of today’s Queen Margrethe, owes his nickname to the fact that his reign saw good times after a long period of famine and that he brought control of the church into the Danes’ own hands, after years of German dominance.

Paphos by pilgrimage
In 1103, Erik and his wife Queen Bodil set off on a pilgrimage to the Holy Land, reaching Cyprus via Russia, the Black Sea and Constantinople. According to the chronicler Saxo Grammaticus, it was from Constantinople, today’s Istanbul,  that the king sent home holy relics, including a splinter from the Cross and a bone of St Nicholas, to his church in Slangerup.

July 10 is noted as the date Erik died of fever in Paphos. King Erik became the only monarch to be buried outside Denmark. Most of the others lie in Roskilde Cathedral.

Erik’s exact burial place is not known but thought to be in lower Paphos at or near the early Christian basilica of Ayia Kyriaki (Khrysopolitissa) or in the nearby Latin Cathedral located to the west on the opposite side of St Paul’s Avenue or, according to a new theory, at the Monastery of Stavrovouni (Mountain of the True Cross), near Larnaca in eastern Cyprus. Queen Bodil continued her journey to the Holy Land, reaching Jerusalem where she died and was buried on the Mount of Olives.

Memorial in 2003
In recent years, archaeological excavations in Slangerup have uncovered the foundations of the church the crusader king built in his birthplace. The digs, conducted by the Danish National Museum, unearthed the extensive foundations and other remains of a huge cathedral-style building complete with imposing pillars, columns, arcades and tower, built in yellow porous travertine stone. The ruins belong to the long-lost church of St Nicholas built by Erik at the very end of the 11th century. Today, the newer St Michael’s Church, built in red medieval limestone in 1588, stands on the same site.

The year 1995 – the 900th anniversary of Erik’s accession to the throne – saw a flurry of activity focused on the illustrious but forgotten Viking king. In Slangerup, an impressive new granite statue of the monarch by sculptor Joseph Salamon was erected outside the Old School House.

In Paphos, a plaque was put up near Ayia Kyriaki Church noting King Erik’s demise in 1103. In 2003, a small group of Danish Catholics held a memorial mass for the king in Paphos, the first such event in 900 years. Among them was the late Pastor Dietrich Timmermann, who at the time was a priest at St Ansgar’s Catholic Cathedral in Copenhagen.