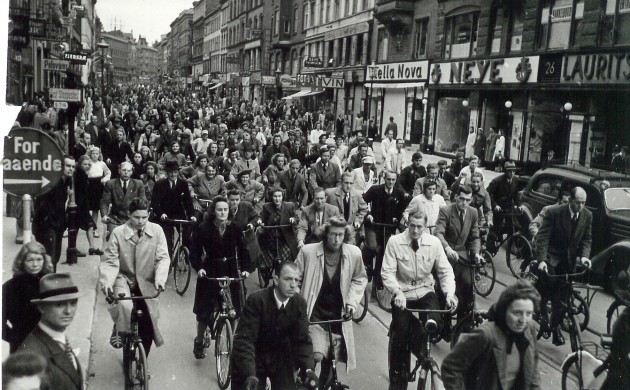 If you thought driving was hard today, just try negotiating this lot on your way to Netto (photo: National Museum of Denmark)
May 2nd, 2016 7:29 pm| by Mark Walker

If you are a tourist or a recent arrival to our fair city, it’s unlikely that the number of people on bicycles will have escaped your notice. As a city that is sorely lacking in any gradient whatsoever, Copenhagen frequently competes with Amsterdam for the world’s number one cycling city title.

Bicycles are an ordinary staple of daily life here, but it might surprise you to learn that the Danish capital wasn’t always so predisposed to developing the urban cycling paradise we enjoy today. Since the introduction of the first velocipede (a term that covers all human-powered vehicles on one or more wheels) onto our streets, Copenhagen has seen the bicycle’s popularity wax and wane.

The world’s first bicycle is difficult to pinpoint, but the first recognisable pedal-powered invention had already been put into production by the French inventor Pierre Michaux (and his two sons) by 1861. In Copenhagen, the first bicycle arrived in 1865. It was probably referred to as  ‘velocipeden’ or (as in the UK) a ‘boneshaker’ − so called due to a heavy wooden frame that had no suspension and wheels lined with steel − but like in the rest of the world, there was little to no fanfare.

However by 1869, Copenhagen was in the grip of a cycling fever that showed little sign of abating. Originally importing from France, the UK and Germany, everyone was talking about this new contraption, albeit as an exotic frivolity rather than a serious form of transport.

A bad penny … for ponies
In the 1880s, the newly-designed ‘penny farthing’ (known as ‘væltepeteren’) was received with scepticism by some who feared that this tall bicycle would frighten the (still prevalent) horses. The farthing (also known as the ordinary bicycle and mostly imported from England along with special clothing) became a luxury item that particularly attracted young men who were determined to master the tricky feat of combining balance and speed. By 1882, Tivoli had played host to the country’s first ever cycling race.

Perceptions changed later that decade with the introduction of the ‘safety bicycle’ as a more sturdy alternative to the penny farthing. A safety bicycle employed two wheels of similar size and crucially placed the rider much closer to the ground. This period saw Danish manufacturers pop up across the country and domestic production grow rapidly. By 1890, there were 2,500 bicycles in the city.

The safety bicycle enabled women to take to the streets and precipitated a change in fashions, not just in Denmark but across the world. Out went the corsets and large billowing dresses, and in came baggy bloomers – a divided skirt cinched at the knee. There was concern that the saddles could be sexually arousing so new ‘hygienic’ ones were introduced, without padding.

“The safety bicycle fills a much-needed want for women in any station of life,” observed the English-language cycling periodical The Bearings in 1894.

Courier careers … around the corner
As production increased, bicycles naturally became less expensive and more widely available. They were clearly being taken seriously when in 1895, Copenhagen’s telephone company became the first organisation to employ bicycle couriers in order to deliver everything from urgent letters to bouquets of flowers. Following that, all manner of merchants were offering a courier service, from dairies to laundrettes.

At the same time, motor cars were being introduced into Denmark, but in very small numbers. By 1903, there were just 100 cars registered in the entire country. In contrast, the Danish Cycling Federation was formed in 1905, and by 1907 there were as many as 80,000 bicycles in Copenhagen alone. Utility cyclists (cycling for non-recreational transport) were commonplace, and Copenhagen was already being marked out as Europe’s foremost cycling city.

As for a proper cycling infrastructure, that took much longer to establish, although the city’s first cycle path appeared on Esplanaden as early as 1892, while Paths were marked out around The Lakes (Søerne) in 1910.

Cycling’s popularity surged throughout the 1920s and 30s. During the same period, however, the motor car was gaining strength, and by 1930, nationwide registrations had shot up to over 100,000.

Cars, collisions and the Occupation
With this, there came all manner of problems for cyclists − especially in regard to road accidents. In 1934 there were 14,000 road accidents (impossible to know which were bicycle-related – a fair few as they had the right of way at all junctions) and 251 of those included a fatality.

In 1935 the Road Safety association was formed and one of their first acts was to increase cyclist visibility by inviting citizens to show up at designated points in order to have their rear mudguards painted white. A few of these can still be seen around today.

Through these kind of initiatives and others, such as setting speed limits (which were abolished in the ‘50s) and traffic awareness lessons for school children, there was a sharp drop in accidents by 1937. In 1939, the state became more involved with the restructuring of roads to accommodate the new forms of modern transport.

The rise of the motor car was curbed in 1940 by the Second World War when Denmark saw its petroleum heavily rationed and cycling became the logical option for transport.

But after the Nazi occupation, the motor vehicle returned in force. Imports and production were up as Danes were keen to enjoy their new-found freedom and display their wealth as their economy grew (recovering from both the war and the Great Depression). The motor car was the ultimate symbol of upward mobility.

In addition to this, the 1950s saw Copenhagen expand into newly-built suburbs − inhabitants working in the city naturally chose the motor car as an obvious solution to their extra daily distance to and from work. Many painted cycle lanes were repainted to allow more space for cars or erased altogether. Cycling was fast going out of fashion.

Striking lucky in the oil crisis
The membership numbers of the Danish Cycling Federation dwindled to virtually nothing during the 1960s. Cyclists accounted for just 10 percent of traffic − an all-time low.

In the meantime, western Europe grew ever more dependent on the Middle East for its oil, and when the Energy Crisis hit in the early ‘70s, few were affected as badly as Denmark. The Organisation of Arab Petroleum Exporting Countries had put a complete embargo on its oil in 1973 as a protest against the US support of Israel.

This meant the Danish government was forced to introduce ‘car-free Sundays’ as a conservational measure, and nowhere were these days embraced as much as in the capital. People accordingly began taking to their bicycles again. Especially young people.

Speeding curbed, the lanes are superb

A galvanised movement emerged, protesting for improvements to the roads − in particular to have segregated cycle paths. To demonstrate the importance of their demands, the protesters began painting white crosses throughout the city at locations where cyclists had been killed. Their efforts saw speed limits reintroduced in the mid-70s and car seat-belts became mandatory.

Finally, in the mid-80s, the demands for segregated, curbed cycle lanes were met, and roads without them became the exception. Initially reluctant, officials tried to restrict the lanes to back streets and secondary routes, but the cyclists insisted they have lanes on the most direct routes too.

World’s premier cycling city
Traffic monitoring began in earnest during the mid-90s, since which time the modal share (recorded percentage of different forms of transport) has risen from approximately 20 percent for cyclists in the city to 41 percent in 2004. The benefits for people’s health, the environment and the economy are well documented.

The future involves a recently implemented network of ‘bicycle superhighways’ that are intended to encourage people in the suburbs to abandon their cars and commute by bicycle. When optimal, this should raise the modal share for the whole of Greater Copenhagen to a whopping 50 percent.