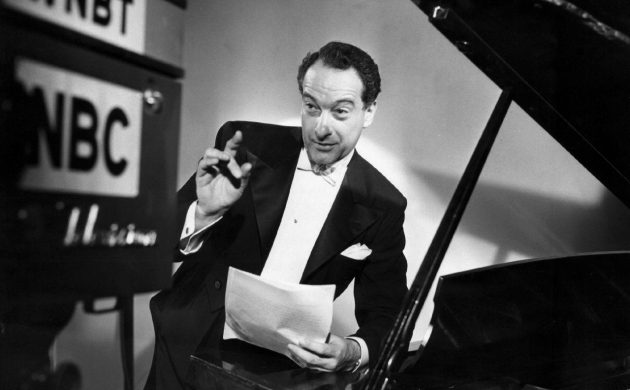 A maestro on the piano with gags at the same time (photo: NBC Television)
February 9th, 2017 8:00 pm| by Robert Cellini

Viggo Mortensen, Caroline Wozniacki and Mads Mikkelsen may have hit the big time internationally, but none are likely to ever achieve the fame that one Børge Rosenbaum was able to obtain on the worldwide stage.

He is, of course, better known as Victor Borge, and he would have been a ripe 108 years old this past January 3.

Borge did manage to live a hearty 91 years, dying just before Christmas in 2000 at his US home in Greenwich, Connecticut. But while his adjustment to life in America may have seemed effortless to his many thousands of fans, Borge himself would have said it was anything but.

A budding talent
It was certainly a most unusual and unlikely voyage to stardom for the Dane, who was born into a middle-class Jewish family in Copenhagen in 1909. His parents were both musicians, and there was already no hiding young Borge’s immense musical talent, even at an early age.

By the age of nine he was given a full scholarship to study at the Royal Danish Academy of Music under several of Europe’s top teachers.

But after spending his teenage years as a concert pianist, Borge quickly became bored with the strict and, as he saw it, humourless routine. There was a comedian inside him fighting to get out, and he first used his musical talent to release his playful inner demons in 1933 – the talent that was to become his bread and butter throughout his long, illustrious career.

Ripping the Reich
That same year he married American, Elsie Chilton – a union that casts doubt on his long-standing claim, when he arrived in the US, that he was unable to speak a word of English. It was, however, in Danish that he perfected his famous routine, combining his skills at the piano with a dry brand of sarcasm and visual gags.

In the late 1930s the Third Reich was threatening, and Borge’s anti-Nazi jokes were causing a stir among the growing contingent of Nazi sympathisers in Europe. He continued to perform until 1940, by which time the anti-Semitic threat had become too great for him to remain in Europe.

“I went to the American Consulate in Stockholm, and one of the officers there turned out to be a fan of mine,” Borge told the New York Times in 2000. “I got a visa to Finland and managed to get on a ship heading out just as they were pulling up the gangplank. It was the last boat to leave Finland for a long time.”

California calling
The ship, the USS American Legion, brought Borge and several high-ranking European and American officials – including the crown princess of Norway – into New York City on 28 August 1940.

He later said that if it hadn’t been for Hitler and the rise of Nazism, he probably would have never been the success he was.

He continued to lampoon the Nazis in his act, quickly learning to adapt it to an American audience and changing his name to Victor Borge. He swiftly achieved success and moved to California for a job as the warm-up act for Rudy Vallee’s radio variety show.

He used that springboard to land a guest spot on Bing Crosby’s national radio show, ‘Kraft Music Hall’. His shtick proved to be such a hit with audiences that, in 1942, he was given a full-time job on the show and became a household name by the following year.

Prankster on the piano
NBC gave him his own radio show in 1945 and he finally made his television debut on the famed ‘Ed Sullivan Show’ in 1948. He then started his own Broadway production in 1952, which was a huge success in both the US and Europe.

His trademark routines were the piano bench seat belt, playing a piece with the sheet music turned upside down, and the ‘Phonetic Punctuation’ skit, in which he would tell a story, accentuating the commas, full stops and other punctuation with sound effects.

He performed numerous times in Denmark during the course of his career – in Danish, of course.

“But in a way, everything I do is understood anyway because it’s musical,” he told Scandinavian Press in 1998. “Basically, there’s no difference between Scandinavian humour and American humour, because when you play something upside down you’re not using language to do it.”

Sorrow over Sarabel
He continued to work exhaustively until just before his death at the age of 91. But when his second wife, Sarabel Sanna Scraper, died in September 2000, Borge admitted he had lost the will to go on.

“I was hopelessly in love with her. And her death means that the future now seems meaningless,” he told Berlingske Tidende newspaper just 13 days prior to his own death on December 23.

Prior to his death Borge had arranged for his ashes to be placed both in the States – next to his wife’s – and in his homeland.

“I’m glad things turned out as they did for me. The USA is a strange country in a lot of ways. But I never felt like a refugee there,” he said.

From Børge to Borge
And as if Borge’s life wasn’t exciting enough while he was alive, now there is cause for further jubilation among comedy and film fans.

This week it was revealed that the life of Denmark’s best ever entertainer will be retold as a film and TV series produced by the Danish film production company M&M Productions.

Run by the two-time Oscar winner Kim Magnusson, M&M Productions will focus the film on Borge’s voyage from Denmark to the US up until the premiere of his one-man show in New York, while the series will cover his entire life.

Both productions are scheduled to be filmed in 2018 and for a man who was given a star on the Hollywood Walk of Fame in 1993 and received the prestigious Kennedy Honor in 1999 – his show ‘Comedy in Music’ remains the longest-running one-man show in Broadway history – there is no doubt that M&M Productions will have plenty of material at its disposal.