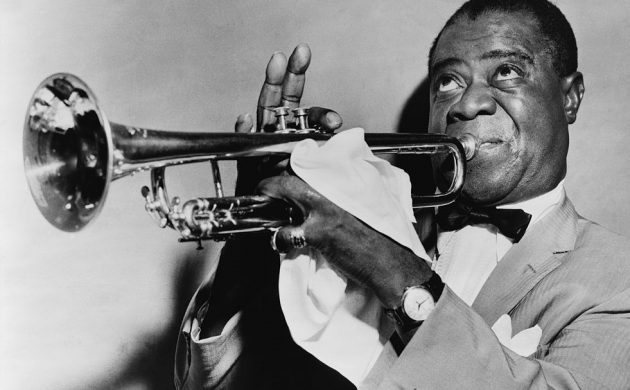 Louis Armstrong took Denmark by storm in 1933 and became one of the nation’s most loved musicians (photo: Library of Congress Prints and Photographs Division)
November 30th, 2016 7:33 pm| by Jane Graham

Fans of Justin Bieber and the like may think that today’s pop stars have laid claim to being the first generation to suffer the lows as well as the highs of music stardom. But were Louis Armstrong alive today, he might offer a different take on such an assertion.

The US jazz musician was legendary all over the world, and his fan-base was no less devoted in Scandinavia, which he was to visit many times during his long and illustrious career.

As well as recording live sessions and concerts in Denmark and being a close acquaintance of Denmark’s most respected jazz musicians of the time – such as Svend Asmussen and Bent Fabricius-Bjerre – few who heard it will ever forget his rendition of the 1924 song named after the city itself: the much played ‘Copenhagen’.

Armstrong was born in New Orleans in the US state of Louisiana on 4 August 1901. He grew up in abject poverty and spent much of his youth getting into trouble with the authorities. During this period of delinquency, he was sent to the New Orleans Home for Colored Waifs where he nurtured his talent playing the cornet in the band and was given some musical training.

His mentor, Joe ‘King’ Oliver, took him under his wing, and in 1922, he invited him to Chicago to join his creole jazz band – at that time the best and most influential in town. Stints in New York, LA and New Orleans duly followed as Armstrong’s reputation grew, firstly as a musician playing the cornet and trumpet, and then as a vocalist, with his trademark deep, gravelly, scat singing style.

From Capone’s mob to Copenhagen’s
By the time Armstrong embarked on his first European tour in 1933 – a decision taken partly to escape the Mob! – he was already a household name across most of the globe thanks to success with hits such as ‘Ain’t Misbehavin’ and Hoagy Carmichael’s ‘Stardust’.

Nicknamed ‘Satchmo’, an abbreviation of ‘Satchelmouth’, due to the comical way his cheeks would puff up like a satchel when he played the trumpet, he arrived at Copenhagen’s main train station in July 1933 to complete pandemonium. The 3,000 fans waiting there hoping to meet their idol came as quite a surprise to him.

According to music journalist Henrik W Iversen, an Armstrong enthusiast, the musician’s origins in the sharply-segregated and racially-prejudiced US Deep South seemed to come back to him as he saw the waiting mob.

“He had no idea that he was so popular in Europe, and when he saw so many people, his first thought was that they’d come to lynch him, he later admitted,” said Iversen.

Killing it at KB Hallen
The fans were apparently so frenzied that they started grabbing and pulling at Satchmo’s clothing, leaving the star half-undressed and in need of a whole new outfit.

This first impression did not deter Armstrong, who was without a doubt the biggest jazz name in Denmark up until the 1950s. By this time, Armstrong had embarked on a successful film career and had even appeared on the cover of Time magazine. When he visited Copenhagen he filled the spacious, and now burned down, KB Hallen music venue 13 times over in a period of six days, with two concerts a night and three on Saturdays.

Armstrong said that he liked visiting Scandinavia because the public understood how to listen to his music, something that the 1933 jazz film ‘Copenhagen – Kalundborg,’ in which Armstrong makes an appearance with many other jazz greats, testifies to.

A trumpeted legacy
Every year during the Copenhagen Jazz Festival, stories of Satchmo and other jazz greats who have graced the city in the past are once again relived, as older jazz lovers relate the experience of witnessing some of music history’s most famous names, including Armstrong himself.

Louis Armstrong died of a heart attack on 6 July 1971, aged 69. Shortly before his death, he said: “I think I had a beautiful life. I didn’t wish for anything that I couldn’t get and I got pretty near everything I wanted because I worked for it.”

The legacy he left – a deep-rooted love of jazz – lives on in many musicians and fans, both home-grown and those who have chosen to make Denmark their base.