 The biggest financial disaster of the 20th century ... in Denmark - The Post 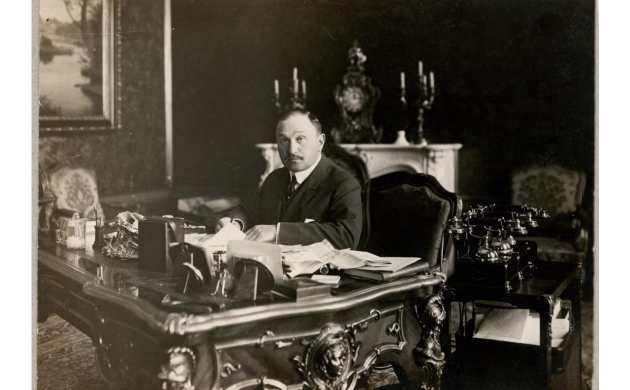 Chairman of the ill-fated Farmer’s Bank, Emil Glückstadt, served as a scapegoat for others involved (photo: The Royal Library)
August 25th, 2016 8:25 pm| by Andrew Miller

As a story of corruption and colossal mismanagement, the failure of one of Denmark’s largest banks in 1922 has never fully been understood, and the cover-ups that surrounded the crash never entirely uncovered. To date, the official losses suffered by the Danish government alone are recorded at 500 million kroner, and the actual amount may even be greater.

The story of the crash is the story of the empire builder Emil Glückstadt. In the first decades of this century, Glückstadt was responsible for building up the Farmer’s Bank (Landmandsbank) and making it one of the most exclusive banking institutions in the country. However, the methods Glückstadt used were not savoury, nor were they always financially sound.

Plum for the picking
By carefully monitoring the market and buying up all of the bank’s loose stock, Glückstadt managed to create the façade of a growing institution. Although this, in itself, may not have been illegal, what was illegal was Glückstadt’s invention of false business consortia that were secretly financed by the bank itself to buy up the loose stock. These false businesses looked to be new investors, but in reality they were only money-circles and their continuation caused an enormous balloon of falsely valued stock – a balloon that burst in 1922.

Of all Glückstadt’s consortia, none comes close to the Transatlantic Company (TC). Founded in 1916, TC was a multi-faceted holding company, a conglomerate owning subsidiaries all over the globe, but in reality it was one of the largest of Emil’s money-circles and his pet project.

From its establishment, TC was shaky. Glückstadt placed Harald Plum of the famous Plum mercantile family as director. Although good with business, Plum’s real gift was ego, and under his leadership TC became a nebulous tangle of mismanagement and debt. Plum inflated the number of shares of TC’s stock and sold them to the subsidiaries.

Sinking feeling
By all outward appearances, TC seemed to be valuable, while in reality it was worthless. With this illusion in place, TC then mortgaged its holding to the Farmer’s Bank which, under Glückstadt’s direction, loaned millions of crowns to the conglomerate. The results of these loans were immediate losses at the bank.

It is uncertain as to what degree the board of directors at the Farmer’s Bank knew about these losses, and to what degree Glückstadt hid them from them. Regardless, soon after the creation of TC, the bank and TC became hopelessly embroiled in a constant bailout effort with TC ever sinking, Glückstadt ever loaning money. The situation reached an absurd level in 1920 when neither the Farmer’s Bank nor TC could tell how much had actually been loaned nor which of TC’s many subsidiaries had lent to it.

With communication at a standstill, records falsified and logistics uncertain, the company became unmanageable. In December 1921, six months before the collapse, Plum was finally removed, but the measure was too little too late.

Convenient scapegoat
For the board of directors, the first order of business was to understand what in fact was happening, and this required time – time thy did not have. In addition, it required that Glückstadt inform the board as to the real nature of TC’s losses. Instead, Glückstadt continued his cover-ups. In June 1922, TC closed its doors.

It was estimated that 250 million kroner was owed the Farmer’s Bank by TC. This was two and a half times the total assets of the bank. The disaster threatened to destroy the entire Danish economy, leaving investors bankrupt and tens of thousands of average citizens penniless. In order to curb the severity of the crash, the government was forced to rescue the bank at a cost of 500 million.

Emil Glückstadt and many of the top executives of both the Farmer’s Bank and TC were charged with fraud. However, Glückstadt never made it to court. He died in jail in June 1923. Many of the others involved in the case used Glückstadt as a scapegoat, placing the responsibility for the disaster on his head. For the most part, this was accepted by the courts. The defendants were regarded as ‘gentlemen’, and so most of the convicted were only fined. Only one man was jailed – for 120 days.

Still under guard
Although 1922 was a long time ago, the very mention of ‘Det Store Bankkrak’ can still get you funny looks in the right circles. In Denmark today, the person who knows most about the crash is historian Søren Mørch, the husband of former city mayor Ritt Bjerregaard, who has spent a large part of his career researching the disaster.

When Mørch began his research as a student of history in the early 1960s, he went to the government archives but was told that the records covering the case had been loaned to the Farmer’s Bank.

Mørch then went to the bank to ask to have access to the records and was denied. “This was not information for outsiders,” he was told.

When the archives protested the bank’s refusal to give up the records, the Farmer’s Bank retorted that access to the material was impossible, as the books “had been lost”.