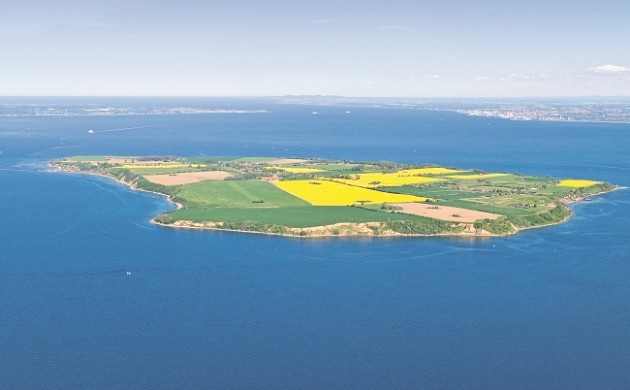 An old Scandinavian legend tells of a female giant by the name of Hvenhild who thought that the gentle landscape of southern Sweden could do with some hills, so she walked across to Denmark’s Zealand and picked up some lumps of land to add to Scania, carrying them home in her apron. But her apron strings burst along the way, and a clod of earth dropped out. This clod became the small Øresund island of Hven.

However it was created, charming and tranquil Hven (with a population of approximately 350) has always shared links with both Denmark and Sweden, being almost equidistant from both countries. It belonged to the Danish nation until 1658, when it was ceded to Sweden along with the rest of Scania.

Refuge for a stargazer

The noted Renaissance astronomer Tycho Brahe was presented with Hven by King Frederik II in the 1570s. It was an incentive for Denmark’s leading scientist to remain in the country, as Brahe had set his mind on moving permanently to Basel. The island was to be the site of Brahe’s observatory, Uranienborg, where he spent the next 20 years in semi-isolation mapping in great detail the sky and its constellations.

After a turbulent youth of duels and arguments, often with other academics, Brahe had become a bitter and rather asocial man, and the seclusion suited him fine. It also provided a refuge for his sister, Sofie Brahe, who welcomed the chance to leave behind a second marriage that was one of extreme poverty and some notoriety. A gifted horticulturalist, she maintained an extensive herb garden on the Uranianborg grounds and assisted her brother in his astronomical observations. Here, in Hven’s tranquillity, she could be taken seriously as a woman and a scientist.

Bricks that built Copenhagen
Even after it passed into Swedish hands, Hven maintained strong ties to Denmark. For a short period during the 19th century, the island played a key part in the burgeoning brick industry, at a time when production was switching from manual to mechanical. Tens of millions of bricks were exported from Hven, mostly to Copenhagen, where they were used to build much of the modern-day capital.

The demand decreased dramatically in the early 20th century, however, and the industry petered out. The population fell as jobs became fewer, and farming once again became the key industry.

Today, Hven’s economy is fuelled by tourism, which mainly consists of short breaks and daytrips from both sides of the Sound. And while the island’s first language is Swedish, its dominant tourist attraction is clearly Danish: the Tycho Brahe Museum and Observatory draw many thousands of visitors every summer.

Hven or Ven?
So how exactly is the island’s name spelt: with or without the ‘H’? The ‘Hven’ spelling is the original one. It was used from the 13th century up until 1959, when the island came under Swedish jurisdiction as part of Landskrona Council (its nearest mainland town), and its name was changed officially to ‘Ven’.

And while it may be natural for people in many parts of England to drop their Hs, for the 350 or so islanders of (H)ven, hanging onto the ‘H’ is crucial to their identity. They want it back enough to take the matter to the highest authorities, and in September 2012 their proposal to change the name back to Hven was brought before the Swedish parliament.