 The innkeeper, his family and their inspiring resistance - The Post 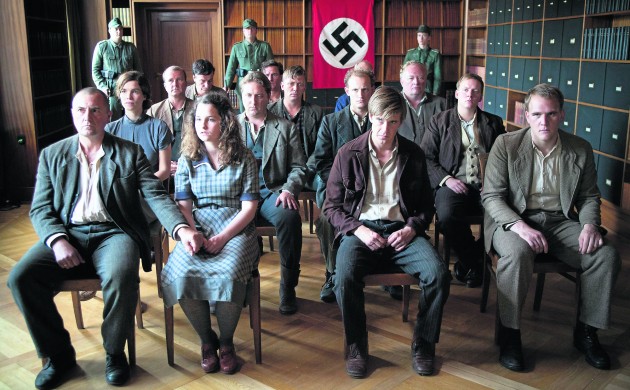 The Hvidsten Group await their fate in ‘Hvidsten Gruppen’, which was a big success in cinemas across Denmark (photo: UIP)
March 17th, 2016 7:26 pm| by Jane Graham

The story of the Hvidsten Group made the celluloid screens across Denmark in 2013, but for the villagers of Hvidsten, a hamlet in northern Jutland between Randers and Mariager, the plot was a familiar slice of local history.

As has become clear in so many different recollections, the two world wars of the 20th century transformed quite ordinary people into brave fighters capable of great and heroic acts. Thus, out of a belief in his country, an ordinary innkeeper and his family were recruited by local resistance fighters to help in the dissemination of ammunitions supplies around the Randers area in March 1943.

The covert operation included not only publican Marius Fiil, his three children – Niels, Kirstine (‘Tulle’) and Gerda – and son-in-law Peder, but also a handful of local workers. It was dubbed the Hvidsten Group because the centre of operations was Fiil’s village pub Hvidsten Kro. The historic coaching inn has remained in the family and is run today by Søren Fiil, the great-grandson of Marius and Gudrun Fiil.

British ammo drops …
For 15 months, the group received supply drops from British planes and hid them at Hvidsten Kro before it all ended dramatically in June 1944.

Every day around teatime the group would gather around the radio in the pub to listen to BBC broadcasts from England. Upon hearing the code words “Listen again” they knew where they had to be at midnight: a rather bleak spot of marshland within walking distance from the inn that the British RAF called ‘Mustard Point’, which was used both for the supply drop and for hiding the empty containers afterwards.

When they heard the Halifax bombers in the area, four lamps were lit: three white and one red. These lamps allowed the pilots to estimate the direction of the wind, thus helping to determine where to make the drop in the dark.

The containers of ammo and explosives were distributed to a variety of resistance groups across Jutland, where they were used to blow up railway tracks, train yards, bridges and other key locations under German control.

… and British dime drops
It was a British parachute jumper that eventually gave the group up to the Nazis. After being captured and tortured by the Gestapo in December 1943, he spilled everything, and at 6.15am on 11 March 1944, Hvidsten Kro was surrounded by Nazi troops, who arrested the entire group. After a military tribunal, eight members were executed by firing squad on 29 June that year, including innkeeper Marius Fiil, his son Niels, and son-in-law Peder.

The innkeeper’s two daughters, Kirstine (Tulle) and Gerda, were also arrested, and although Kirstine escaped the fate of her husband, brother and father, both sisters were sentenced to life imprisonment in a German prison.

When news of the executions spread across Denmark, public outrage was great, and a wave of smaller strikes in Copenhagen developed into a co-ordinated, nationwide general strike.

Rebel with a cause
Kirstine Fiil was released from prison at the end of the second World War and remarried a concentration camp survivor named Olaf Møller, who was in the military. She returned to Hvidsten Kro and – bar a few short relocations due to her husband’s army postings – remained there until her death in 1983.

One family member who may only have a passing role in the film, but – at least according to one reviewer from DR – is perhaps the most interesting, is Gerda Fiil. The youngest of the Fiil children was just 16 when the supply drops began and was told by her parents to “stay at home”. Resistance comes naturally to teenagers, however, and Gerda’s role was an active one that led to her arrest aged just 17.

The entire area around Randers and Mariager contains many reminders of the contribution the group made to the Danish Resistance, including a number of plaques and stone memorials. Interested visitors can find walks and guided tours not only around Hvidsten Kro, but also to the drop site, Mustard Point.