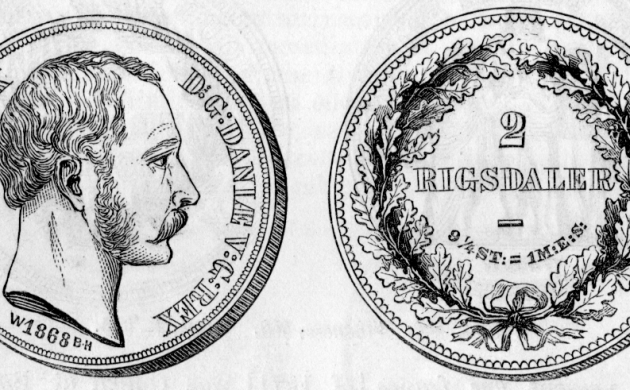 ‘It costs a daler,’ the shopkeeper said. He was given two kroner.

Daler or ‘rigsdaler’ is a Danish coin that was minted between 1537 and 1875, when kroner and øre replaced the old coinage. However, daler is still used today as a term for two kroner, the value it had then in kroner.

The term ‘skilling’ can also be heard today.

Due to spiralling inflation at a late stage during the Napoleonic Wars (1804-1815), the Danish state did not have enough money to pay its debts – it went bankrupt on 5 January 1813. One result was the introduction by the national bank (Rigsbank) of a new currency based on the rigsbankdaler. This was divided into 96 rigsbank skilling and was equal to half a rigsdaler species or six rigsdaler courant.

Scandi union
Between 1840 and 1843, a new coinage was introduced, consisting of 1/5, 1/2, 1, 2, 3, 4, 8, 16 and 32 rigsbank skilling, 1 rigsbankdaler and 1 rigsdaler species. Denominations between 4 rigsbank skilling and 1 rigsbankdaler were also inscribed with the denomination in the currency of Schleswig-Holstein, the Schilling Courant, of which there were 60 to the Speciethaler – equal to the rigsdaler species. These denominations were 1 and 1/4, 2 and 1/2, 5, 10 and 30 Schilling Courant.

Sweden and Denmark formed the Scandinavian Monetary Union on 5 May 1873, when the Danish krone replaced the rigsdaler. The two countries fixed their currencies against gold at a par to each other: 2.48 kroner/kronor per gram of gold, or roughly 0.403 grams/krone.

While the monetary union provided fixed exchange rates and stability in monetary terms, the three member countries continued to issue their own separate currencies. However, they were accepted on a basis of ‘as good as’ the legal tender virtually throughout the entire area.