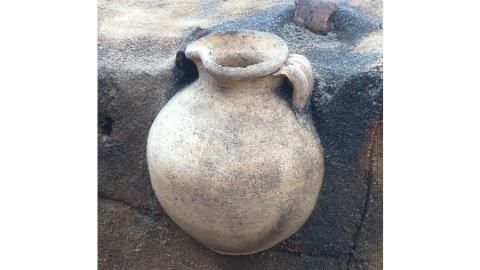 Ribe’s archaeology never ceases to surprise, and now teams from the University of Aarhus and Sydvestjyske Museum have made yet another unique find during excavations in the city’s oldest burial ground.

Half a metre underground in a parking lot, wedged between other urns and tombs, they have discovered a perfectly intact French wine pitcher, which is predicted to be around 1,000 years old.

“It is a unique find,” said Morten Søvsø, the head of archaeology at Sydvestjyske Museum.

“The pitcher is an example of the finest pottery produced in northern Europe at the time, and it has never been seen before in Denmark. The vessel reveals information about the vast trading network that put Ribe on the map during the Viking era.”

The pitcher is the size of a small teapot and was discovered by archaeology students from the University of Aarhus during a training excavation.

“Ribe is the oldest city in Scandinavia, and we often excavate at the city’s ancient burial ground to find out more about our ancestors in the north,” Søren M Sindbæk, a professor of medieval and Renaissance archaeology, told Ekstra Bladet.

“The cemetery is full of surprises, but this finding still made all our work come to a halt. We could not believe our eyes.”

Finding is a “masterpiece”
The pitcher is what is referred to as a trefoil jug, made in France or Belgium during the time of the Merovingian dynasty (about 450-750 AD).

“The jug is a masterpiece from the French or Belgian workshops, and its elegant form is a direct legacy from ancient Roman potters. No pottery at home could technically produce such a thing at the time,” said Søvsø.

Søvsø asserts it is something of a miracle that the pitcher was found completely intact.