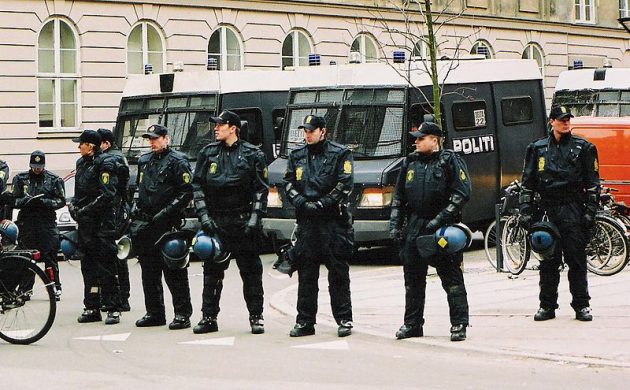 Ten years later and the police were once again forced to respond with force (photo: Necessary Evil)
March 2nd, 2017 9:05 am| by Christian W

Ten years after Copenhagen endured some of the worst riots in its history in the wake of the demolition of Ungdomshuset youth house on Jagtvej 69 in Nørrebro, the activists were at it again.

A demonstration yesterday marking the ten-year anniversary of the iconic building being torn down turned into mayhem, leading to stones being thrown at the police, smashed shop windows and at least five arrests.

“Most were peaceful, but there were a few among them who were unable to behave properly,” Jørgen Skov, the chief police inspector from Copenhagen Police, told Metroxpress newspaper.

“That meant we had to break up the demonstration twice. It’s been a long time since it’s looked like this.”

Nothing forgotten, nothing forgiven
The demonstration was first dissolved on Nørrebrogade, but the police decided against making arrests as there were children and elderly people among the demonstrators.

When the demonstration reached Jagtvej, the police stepped in again.

And then at the new Ungdomshuset location on Dortheavej in Nørrebro, a group of demonstrators gathered and the police attempted to get them out of the building. The activists again began throwing stones and bottles at the police from the building.

The prime minister, Lars Løkke Rasmussen, and the Copenhagen mayor, Frank Jensen, were among those who condemned the unruly behaviour of the activists.

“Copenhagen has room for everyone. But NO-ONE has the right to put a whole city district in a state of emergency. Stop it!” wrote Jensen on Twitter.

City burns in 2007
The plot on Jagtvej 69 was formerly the home of Ungdomshuset, a youth culture centre run by an anarchist and left-wing community that had been squatting at the building since 1982.

But in 1999, the city municipality sold the building and it ended up in the hands of Faderhuset, a Christian sect.

In 2007 Faderhuset exercised its ownership rights to evict the residents and –after a dramatic police eviction operation that involved police commandos being dropped in by helicopter – Faderhuset had the building condemned and torn down.

That led to some of the worst riots in Copenhagen’s history.