 'Borg/McEnroe' wins over Danish critics, but the Superbrat and Brits remain sceptical - The Post 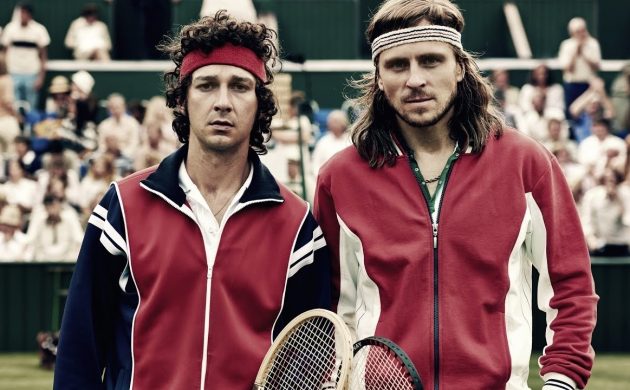 Shia LaBoeuf’s performances has been universally praised, but will McEnroe find fault with his body double?
September 15th, 2017 1:50 pm| by Ben Hamilton

The Danish film reviewers are ecstatic, the rest of the world luke-warm. It’s not another English-language film made by a Danish director, is it? You cannot be serious!

Danish critics show the love
The keenly-anticipated ‘Borg/McEnroe’, the first feature film made by acclaimed Danish documentary maker Janus Metz (‘Armadillo’), made its bow at Danish cinemas yesterday ahead of its international release next week.

And the consensus is very good so far, with Politiken, CPH Culture, Berlingske, BT and Go Morgen Danmark all giving it five out of six stars.

In contrast, the British broadsheet media weren’t impressed after catching its worldwide premiere in Toronto earlier this month, giving it just two or three stars out of five.

The Danish film critics, a self-important bunch who even have their own annual awards, are known for being partisan, but are the Brits being too harsh on a recreation of what is probably the most compelling piece of sport ever witnessed on its shores.

Not a patch on the real thing
“This tennis film feels like a two-hour baseline rally, and it’s not just the rackets that are made of wood,” despaired the Guardian in a two-star review. “It feels like someone’s been over-diluting the Robinson’s Barley Water.”

Nevertheless, the reviewer betrayed a certain antipathy towards tennis films in general: “Tennis on film isn’t exciting. Something about the grammar and structure of movie editing cancels the rhythm and cumulative drama of tennis itself.”

The Independent, awarding three stars, was also ultimately disappointed, lamenting a sports biopic that “fails to feel like one for the ages”.

IndieWire described it as a “staid little movie that races around the court and rallies itself to exhaustion – a historical drama that enshrines the narrative underpinnings of all great sports stories without doing anything to upend them”.

And the Atlantic derided “badly written, super chintzy biopic formula crap that wastes an excellent Shia performance” – or at least that was the opinion of David Sims, one of its culture editors on Twitter.

His opinion regarding Shia LaBeouf as McEnroe was shared by the British newspapers, and his performance has so far been universally praised.

855! You cannot be serious!
So far, though, there have been no major complaints about the tennis scenes, and this will please Thomas Kromann, an unsung Danish player who stood in for LaBeouf for the more challenging McEnroe shots.

“I’ve always enjoyed imitating other players and I watched a lot of old videos in preparation, so I hope people think it’s okay,” Kromann told DR.

His fiercest critic will be McEnroe himself.

“I’ve never seen a good tennis movie. They all were terrible,” he told Vanity Fair when he heard about the film.

“They look like actors who can’t play. You see these guys, they go out there and they barely even know how to play tennis.”

Whether the three-time Wimbledon champion will be impressed by a player whose highest ever world ranking stood at 855 remains to be seen.