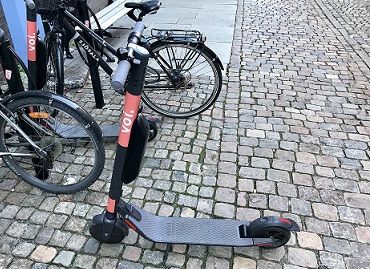 If you’ve been tempted to use one of the red electric scooters that have recently appeared on Copenhagen’s streets put out by the Swedish company Voi, you may be in line for a nasty shock.

Due to an error, personal data from 460,000 users has been freely available on the internet, including names, email addresses and telephone numbers, reports Bayerischer Rundfunk.

In addition to Denmark, the company has scooters for rent in cities in Sweden, Finland, Spain, Portugal and France.

Red faces all round
Voi announced that the security breach had been closed a couple of hours after it had been contacted by the German media.

“The fault was rectified immediately and we’ve beefed up our security standards so that it doesn’t happen again,” Voi’s press officer Caroline Hjelm stated in an email to DR Nyheder.

She added that the Swedish data protection authorities had also been alerted.

Denmark signs water tech deal with Argentina
As part of the current high-powered Danish government visit to Argentina spearheaded by Queen Margrethe and Crown Prince Frederik, the environment and food minister, Jakob Ellemann-Jensen, has signed an agreement with his Argentinian counterpart to ensure a more sustainable development of Argentina’s water resources. At present, a lot of water goes to waste in the bigger towns in Argentina, and Danish water infrastructure technology can alleviate the problem. Argentina recently launched a national water plan that includes earmarking 60 billion kroner for water projects to improve access to clean drinking water and improve levels of sanitation in general.

DI to beef up efforts in Germany
The confederation of Danish industry, Dansk Industri (DI), recently announced the setting up of a project department in Munich. The centre will be run in collaboration with several other Danish business groups, and its aim is to help companies that want to export to Germany, but may have difficulty coping with the different laws in place in the 16 German states. “It is extremely positive that DI is increasing its focus on Germany, as it is Denmark’s largest export market,” said DI’s administrative director Vibeke Svendsen. “For small businesses it is important to obtain input on things such as the correct way in to the market and the right contacts.”

Legoland opens new hotel
Legoland’s owner Merlin Entertainments Group has announced the opening of a new attraction – the Legoland Castle Hotel – next to its theme park in Billund on Friday March 29. The hotel is built as an enchanted castle with 142 themed rooms, amongst which are the dragon knight’s room, the princess’s room and the wizard’s room. There is also a large new restaurant area entitled Knights’ Tavern. In addition, the hotel also includes a fitness centre and a Nintendo game zone. The opening will be celebrated with a weekend of festivities and a gala opening show starting on Friday at 19:30 in front of the hotel. The Legoland theme park will also open its doors for the 2019 season the following day.

Arla launches new lactose-free milk
In response to an increasing demand for more plant-based foods, Danish dairy giant Arla is set to launch a new lactose-free drink later this week. The drink is made of 50 percent lactose-free skimmed milk mixed with 50 percent oatmilk (oats and water) and will only have 0.6 percent fat. Arla Laktosefri Mælk & Havre Drik will be sold in Føtex, Netto and Bilka plus selected Meny supermarkets.