 Danish News in Brief: Copenhagen Metro may be extended - The Post 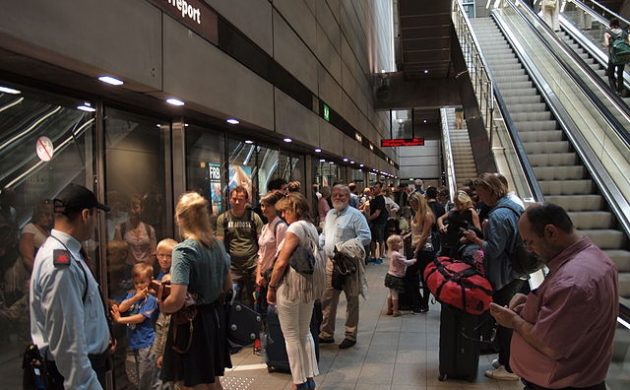 Study shows that public transport needs to be expanded to cope with expected demand over the next eight years (photo: JIP)
September 11th, 2017 10:36 am| by Stephen Gadd

Even before the currently under construction City Ring has opened, Copenhagen’s politicians are champing at the bit to take on further Metro building projects.

The city is growing fast and traffic is expected to increase by 50 percent up to 2050. That will put pressure on the existing transport infrastructure, including the Metro.

The municipality has decided to carry out a feasibility study to investigate a new Metro line, light railway or BRT bus from Copenhagen’s central station to Amagerbro, Refshaleøen and Brønshøj.

“We’ve markedly strengthened public transport over the past few years, but we’re not there yet,” commented Mayor Frank Jensen.

“A new extension would bind the city tighter together and make it even easier to get around – regardless of where in the city you live.”

The municipal city council is expected to greenlight the study at a meeting on September 12, and the conclusions of the study will be included in the municipality’s construction plan for 2019.

Nordhavn’s cruise ship terminal to expand
In 2014, Copenhagen inaugurated a new cruise ship terminal in Nordhavn that could offer berths to three cruise ships at a time. Now, Copenhagen Malmö Port (CMP) wants to extend it by building another terminal with space for double the number of ships, reports News Øresund. At the same time, the harbour intends to intensify its efforts to persuade cruise passengers to go ashore and enjoy the city. Larger ships mean lower prices and more cruise passengers, so CMP already feels that there is a need for an upgrade to the existing terminal.

Danish food app makes Forbes top 10 list
TastePlease, a Danish app that facilitates the meal sharing economy, has made a list of the ’10 mouthwatering food apps to watch’ on the Forbes website. The app, which has been described by Morgan Thomas, the company’s manager of taste relations, as being “like Airbnb for foodies”, allows people to join or host private dinners anywhere with strangers all over the world. It is designed to help travellers discover and experience authentic kitchens and bring people together through a shared passion for food. TastPlease is available for free on Android and iOS.

TDC swallows up Plenti
As of today, the mobile phone company Plenti will become part of the TDC group. Founded in 2015, Plenti has been bought by TDC for 74 million kroner. The deal means that TDC will assume responsibility for Plenti’s 90,000 customers. Michael Moyell Juul, the head of brands at TDC, explained: “We’re glad we’ve been able to make a deal with Plenti. It is a solid company with a strong team that in a short time has managed to build up a large customer base.” The change of ownership will not have any impact on Plenti’s existing customers or staff.

New boss for Danish medicinal giant
After only two years in the post, Kåre Schultz, the current CEO of the Danish drug company Lundbeck, has announced he is stepping down. Schultz has accepted a new post as CEO of Teva Pharmaceutical Industries, reports DR Nyheder. He leaves the company in a strong position, stating that “Lundbeck is a unique company and this year is on track to deliver the best financial result ever.” Lundbeck has now started the process of looking for a new CEO and Schultz will continue at his post for the time being.