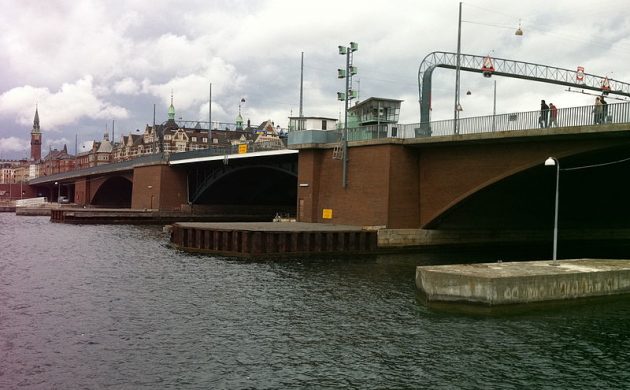 Crashes like the one on Langbro concern the minister (photo: Wiebevl)
August 29th, 2019 3:30 pm| by Ben Hamilton

Nick Hækkerup, the justice minister, questions whether a maximum sentence of eight years in prison for dangerous driving is enough in Denmark.

Hækkerup would also like to change the law that enables dangerous drivers to circumvent vehicle confiscation rules by claiming they were leasing it from somebody else.

It would appear that the vehicle is leased or borrowed in quite a few cases of dangerous driving.

Additionally in July, a motorist veered into oncoming traffic on Langebro, killing a 35-year-old police officer in a head-on crash.

While a man with apparent gang connections remains in custody following Saturday’s incident (until September 10) – four others were arrested but released.

Aquaculture project shelved over nitrogen emission concerns
Lea Wermelin, the environment minister, has confirmed that an aquaculture project off the coast of Djursland in east Jutland will not be going ahead as planned – mainly due to concerns over excessive nitrogen emissions. The mayors of the nearby municipalities of Syddjurs and Norddjurs were both opposed to the plans to farm fish in huge circular nets clamped to the seabed. “Our marine and aquatic environments are depressed enough as they are,” Wermelin told TV2. There are 19 aquaculture farms in Denmark – most of which specialise in trout. Some 10,117 tonnes of rainbow and golden trout were produced by Danish aquaculture in 2016. To combat the nitrogen problem, which primarily stems from fish feed and faeces, some aquaculture facilities farm mussels along the seabed to absorb most of the emissions.

Several politicians contacted about appearance on Turkish government list
The PET security services have contacted more than 100 Danish people to inform them they have been named in a 666-page report as sympathisers of the Kurdistan Workers’ Party (PKK). The report has been compiled by the Seta think-tank on behalf of the Turkish government, which considers PKK as a terror group – a view shared by many, including the US, the UK, the EU and NATO. Among the Danes mentioned were several prominent politicians, including Enhedslisten’s de facto leader Pernille Skipper, SF leader Pia Olsen Dyhr, Alternative leader Uffe Elbæk, former foreign minister Holger K Nielsen and outspoken Socialdemokratiet MP Lars Aslan Rasmussen, who told Berlingske it was “disgusting because I have nothing to do with PKK. The only reason I am mentioned is that I am critical of [Turkish President Recep] Erdogan.”

Major Brazilian food producer on inspiration tour of Denmark
Brazilian poultry and pork producer BRF, one of the world’s largest food companies, is currently on a visit to Denmark in search of inspiration. In total, BRF will meet 25 Danish companies on the inspiration tour, which has been arranged by Landbrug & Fødevarer. BRF is believed to be interested in the companies’ strict food security practices – for example, the way they have cut down on the use of antibiotics in pig farming, and also the way they combat salmonella. L&F contends that the visit could open up export routes for Danish companies – particularly those that produce equipment and technology for the food industry.

MPs would back plans to increase surveillance  capabilities in Greenland
A large parliamentary majority is in favour of Denmark increasing its surveillance  capabilities in Greenland, reports TV2. According to Trine Bramsen, the defense minister, the viewpoint is a nuanced one, as on the one hand Denmark would prefer the Arctic to remain a “low-voltage area”. But on the other, countries such as the US, Russia and China are clearly interested in the region. “We have to deal with the reality that there is a lot of interest in the area and accordingly set up new initiatives that relate to surveillance and presence”.

Bang & Olufsen: not officially up for sale, but would listen to offers
Luxury electronics manufacturer Bang & Olufsen is not officially up for sale … but it will listen to offers, its chair Ole Andersen has confirmed in a statement to the Copenhagen Stock Exchange, which conceded that the company needs a contingency plan in light of 77 percent fall in profits for the 2018-19 fiscal year, along with a 70 percent fall in its share price over the same time period. “If we were to get an inquiry, we would listen,” stated Andersen. “But, of course, it will have to be discussed with the shareholders.”

LuggageHero continues to expand – this time with an acquisition
Short-term luggage storage network LuggageHero, a company launched in Copenhagen in 2016, continues to expand – this time with the acquisition of Knock Knock City, a competitor with a presence in 15 cities, including several in the US. LuggageHero already had a presence in 26 cities in Europe and North America – some 1,000 drop-off points – and the acquisition will take it up to at least 30, with Munich, Denver, San Diego and New Orleans all confirmed as new locations.