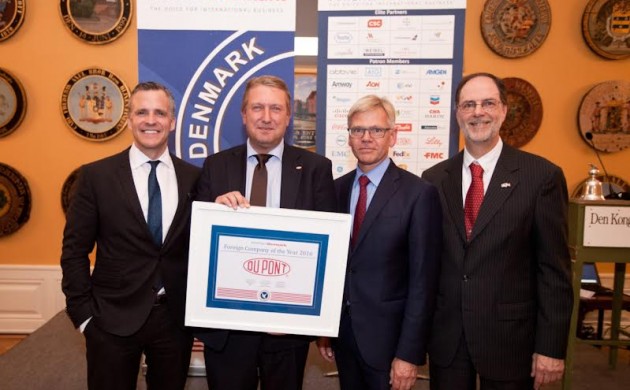 The American Chamber of Commerce in Denmark (AmCham Denmark) has announced that the US chemical conglomerate DuPont has been selected as the winner of its annual ‘Foreign Company of the Year’ award.

The AmCham jury focused on DuPont’s important investments in the Danish food industry, which accounts for a considerable part of the Danish economy.

“With the acquisition of Danisco and the subsequent formation of a new headquarters for Nutrition & Health in Copenhagen, DuPont demonstrates a strong conviction in the capabilities of the Danish food cluster by investing heavily in research and production facilities,” said Karsten Dybvad, the spokesperson for the jury and head of the confederation of Danish industry, Dansk Industri (DI).

“By committing to numerous strategic partnerships as well as being a significant employer in Denmark, DuPont is a valuable asset to the Danish economy that has shown great initiative to drive their global agenda from here.”

Danish hub
Founded in France in 1802 as a gunpowder mill, DuPont today employs over 1,200 employees in Denmark. It is the world’s fourth largest chemical company based on market capitalisation.

Flemming Jørgensen, the head of DuPont Denmark, dedicated the award to the company’s employees in Denmark and their focus on generating innovative products.

“DuPont has been present in Denmark since the 1960s, but with the acquisition of Danisco in 2011 – known today as DuPont Nutrition & Health – DuPont established itself in earnest as one of the largest employers in Denmark,” said Jørgensen.

The ‘Foreign Company of the Year’ award highlights the importance of direct foreign investments and the positive impact foreign companies have on Denmark and Danish society.