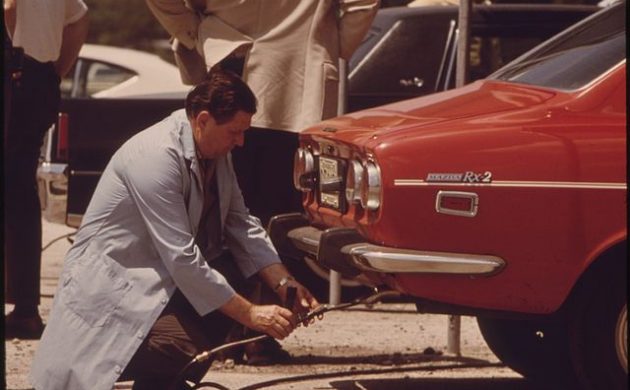 The EU wants countries to do their own emissions testing (photo: US National Archives and Records Administration)
April 5th, 2017 4:30 pm| by Stephen Gadd

If EU parliamentarians have their way, countries like Denmark which at the moment don’t carry out comprehensive emissions-testing programs, will have to start doing so.

Extensive testing is seen as the only way to put an end to the series of scandals which engulfed companies such as Volkswagen regarding emission levels from cars, Ingeniøren reports.

At the moment, new cars are tested in the EU country in which the car factory is situated, and the laboratories receive significant income from the car industry. This has led to claims that they are not completely independent.

In the pocket of the industry?
The Danish Socialdemokratiet MP, Christel Schaldemose, who has been involved in investigating the ‘Dieselgate’ scandal said “we need much, much better control. There should not be links between the car industry and those who approve cars. The tests which are carried out should also be based on normal driving.”

In future, parliament thinks that each member-country should test cars in real traffic – so-called ‘Real Driving Emissions’ tests. Each country should test 20 percent of all new cars coming onto the market. As each model has different types of engine and in some cases accessories, a testing industry and database should also be built up in Denmark.

Advocating for an EU agency
However, Schaldemose favours an EU agency, as she thinks that it would be both more effective and cheaper than increased control in the individual member countries.

“A lot of countries haven’t done anything at all to check cars because today, you only need to do the tests which you feel necessary. We are asking that goals be set for how much testing member-countries should do.”

She is open, however, to the idea that it only need be 20 percent of all type-approved vehicles.