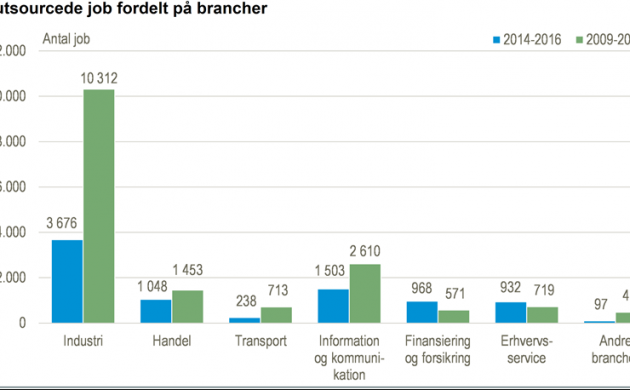 Industrial sector may lead the way, but finance and business are moving in wrong direction (photo: Danmarks Statistik)
December 1st, 2017 10:35 am| by Christian W

According to new figures from the national statistics keepers, Danmarks Statistik, far fewer Danish jobs are being outsourced abroad compared to just a few short years ago.

“It’s clearly a result of Danish companies being successful in their attempt to become more competitive,” said Morten Granzau, the chief economist of the confederation for Danish industry, Dansk Industri (DI).

Finance anomaly
Overall, 12 percent of Danish companies with 50 or more employees outsourced in 2014-2016, while of the 8,500 jobs that were outsourced, 26 percent were highly-qualified jobs.

The industrial sector accounted for the highest portion of outsourced jobs with 3,676, followed by information and communication (2,610) and trade (1,048). Interestingly, finance and insurance (968) and business services (932) were the only two sectors that outsourced more compared to 2009-2011.

According to Danmarks Statistik, lower wage costs are the primary motive for international outsourcing – 71 percent of companies with 50 or more employees responded in a survey that it was an ‘important’ or ‘very important’ reason for doing so.