As Malmö continues on its quest to become an influential player in the Øresund region, a new concert and convention centre opened for business in the southern Swedish city on Saturday.

With a capacity of 1,500 convention guests and 1,600 concert-goers, the centre – dubbed Malmö Live – is geared to become a new attraction and convention hub in the city across the Øresund Bridge.

“Suddenly, we have two new places because Malmömässan has also expanded.”

READ MORE: More people open to commuting across the Øresund

Culture and business
Aside from the concert hall and convention centre, Malmö Live’s 90,000 square metres also includes offices, housing and a 444-room hotel with two restaurants and a sky bar – all designed by the Danish architects Schmidt/Hammer/Lassen. The centre will be officially inaugurated on June 4.

Malmö’s Symphony Orchestra will move into the new concert hall in Malmö Live and will play concerts once a week. Malmö has spent one billion Swedish kroner on the concert house.

The concert season kicks off on August 28 and several international artists have already signed up, including the Chinese pianist Lang Lang, the Israeli jazz bassist Avishai Cohen and the German artist and sound designer Robert Henkes.

“This is Malmö Municipality’s biggest investment since 1944 when the opera was opened,” Karin Karlsson, the concert program manager, told News Øresund.

“We see an opportunity for culture and business to merge with one another in this hall.” 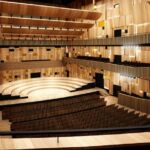