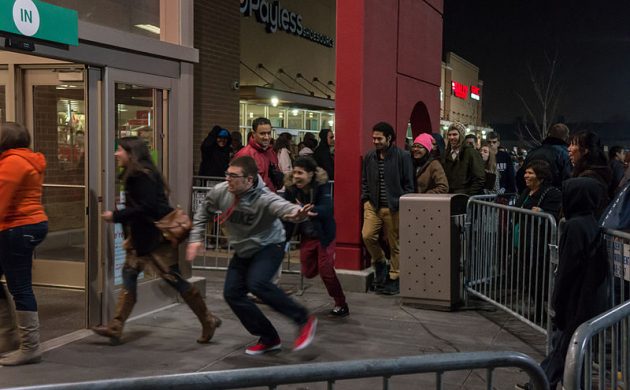 Also increasing is the number of people watching the news on Black Friday to watch idiots fighting each other over the latest must-haves (photo: Powhusku)
November 22nd, 2018 5:30 pm| by Laura Ruperez

Black Friday is now the biggest single spending day in Denmark. The tiny country that prides itself on minimalism has not only adopted the most materialistic day the world has ever known, but is in fact excelling at it.

In 2017, Danes spent almost 2.1 billion kroner (282 million euros) on Black Friday, according to TV2. The figure makes 24 November 2017 the biggest shopping day of all time in Denmark. It represented a 5.6 percent rise on the year before.

In just five years
Dorte Wimmer, the retail and consumer director at the Retail Institute Scandinavia, notes that this growth in popularity is unusual.

“It’s quite remarkable that it’s grown so fast because it took us more than 20 years to fall in love with Valentine’s Day – and Halloween as well,” she told CPH POST.

“But Black Friday has been very popular in just five years.”

An October 2016 survey carried out by Dansk Erherv revealed that 78 percent of adults had heard of Black Friday – up from 52 percent the year before. That number has now reached 92 percent.

Additionally, 16 percent of respondents said they knew of Cyber Monday – a 10 percentage-point increase from 2015.

Smart shoppers
According to Wimmer, Danes are merely being smart shoppers when it comes to Black Friday.

“Everyone wants to save money, and the Danes have a large appetite for discounts,” she said.

Wimmer predicts that this year’s Black Friday will smash last year’s single day shopping record. However, she does think that days like Cyber Monday or Amazon Prime Day will rival Black Friday in the future.