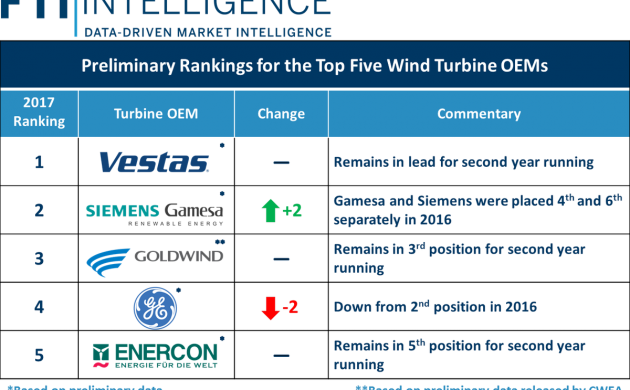 According to the ranking, published today by business advisor FTI Consulting, Vestas finished ahead of Siemens Gamesa, which jumped two spots into second place compared to last year.

“Vestas has a global presence that other producers envy. They sell wind turbines in all possible markets,” said Jacob Pedersen, an analyst from Sydbank, according to BT tabloid.

“Meanwhile, they have some outstanding products. They won a lot of orders in 2016 and 2017, so is comes as no surprise that Vestas is king of the hill in 2017.”

Spanish bull
The news comes despite the global wind energy market being impacted by changing market conditions last year, which has led to reduced earnings for producers – down 14 percent per MW compared to 2016.

But Vestas can’t afford to rest on its laurels. Siemens Gamesa is making a strong charge to topple Vestas’s position as kings of the wind turbines, and the Spanish company has a strategy to be the world leader by 2020.

Pedersen, though, believes that Vestas will remain the top wind turbine supplier this year as well.