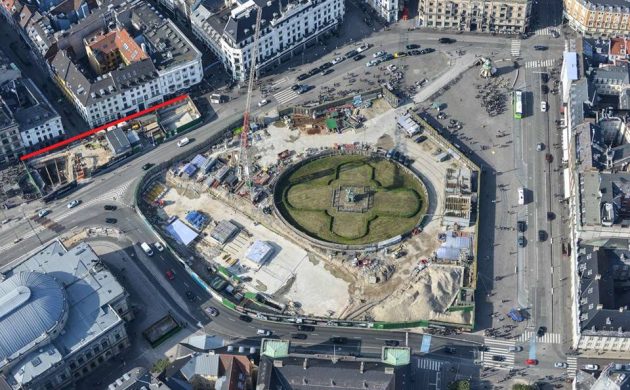 Forgotten what it looks like? You’re probably not alone (photo: Metroselskabet)
January 26th, 2018 11:59 am| by Christian W

Kongens Nytorv is supposed to be one of Copenhagen’s most attractive areas for tourists and locals alike.

But for the past six years, the square has been blighted by a huge green wall erected to hide the ongoing Metro construction taking place underground.

But the unsightly wall is about to meet its demise.

Gone by Monday
As of Monday, the wall will be gone at Kongens Nytorv, signaling that the end is drawing near for the long-running construction odyssey.

“When the City Ring is ready, it will better connect the city, reduce traffic and make leaving the car at home an even more attractive proposition,” said Frank Jensen, the city mayor.

“Not least at Kongens Nytorv, where we will recreate the beautiful square ahead of the opening of the City Ring in 2019.”

Getting there
The Danish capital’s largest square was founded in 1670 by Christian V, who drew on inspiration from Paris. At its centre is a statue of the former king on horseback, surrounded by a garden named Krinsen.

However, for the many who moved to or have visited Denmark since the Metro wall went up, it will be the first time they have seen it.

As work continues to complete the square ahead of the City Ring opening next year, the green wall will be replaced by a wire fence.

But when the Metro stop eventually does open at the iconic location in the summer of 2019, about 80 new emperor lime trees and 900,000 cobblestones will be planted and laid out on the square.

A new main stairwell and underground pedestrian tunnel between the new station and existing Metro stations at Kongens Nytorv still remain to be built.

Once the City Ring is completed, it is expected that daily passenger figures at the Metro hub, which will link the new line to existing lines, will more than triple to 90,000.