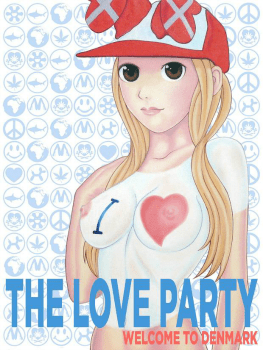 The city of Copenhagen is removing 2,500 illegally-hung posters of a fictitious political party called The Love Party that have been posted across the capital over the last two days.

The man behind the posters, which show topless women and promote love and freedom of speech, sexuality, colour and religion, is Søren Vilhelm (aka Artpusher), a member of the Alternativet party running in this year’s general election.

The mission of The Love Party is, among other things, to get values like common sense, love and compassion back into the political arena, which according to Søren Vilhelm has been supplanted by self-sufficiency, self-interest and profit optimisation.

“It’s a way to spread some alternative ideas,” explained the artist on his Facebook page.

Vilhem spent 100,000 kroner from his own pocket paying for the posters and having them distributed across the capital.

40 kroner for removing one poster
His attempt to ‘beautify’ Copenhagen has not pleased the councillors who have decided to remove the posters immediatelly. And it is not going to be cheap.

According to Jyllands-Posten, the removal of one poster may cost up to 40 kroner, so with 2,500 posters hanging around the city, that’s 100,000 kroner.

It is illegal to hang posters that are not of the established political parties during the election campaign.

“You think you’ll getting sugar-sweet candy, but if you look closer I’m expressing political opinions in the background,” said Vilhelm.

“I just camouflaged them with big breasts. It’s a Trojan horse.”

Decorating Copenhagen is costly
Artpusher and the Love Party decorated Copenhagen with posters during the elections in 2011.

The response back then was overwhelming and many people took the posters home as art. Some were even put up for sale on the internet.

However, Vilhem ended up having to pay a fine of 80,000 kroner (plus tax) for his illegally hung posters.