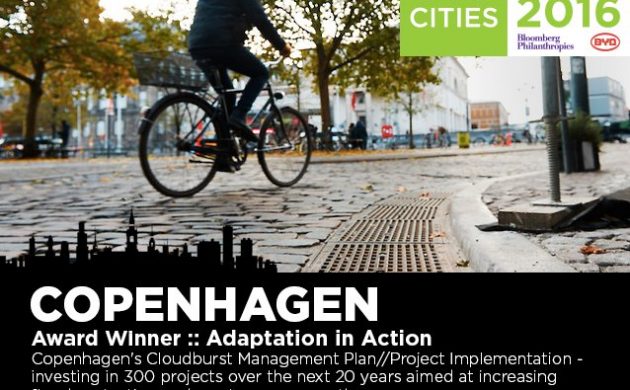 Copenhagen has been awarded a prestigious C40 Cities Award for the city’s comprehensive management and protection plan aimed at preventing flooding and encouraging growth in the Danish capital.

The city mayor, Frank Jensen, was in Mexico City as part of the C40 Cities Awards to receive the award in the category ‘Adaptation in Action’.

“I am proud to accept the prize for Copenhagen’s ambitious plan, which protects the city against cloudbursts and generates new green urban spaces to the benefit of Copenhageners,” said Jensen.

“There are many cities that are fighting against increased rain and flooding, as we are, so our work in climate-adapting Copenhagen has garnered great international attention.”

An example for others
Copenhagen’s cloudburst plan includes 300 separate projects that are expected to run over the course of the next 20 years.

The Danish capital has already signed co-operation deals with other cities – such as New York and Washington – that want to learn from Copenhagen’s experiences within cloudburst protection.

Copenhagen won the C40 award ahead of Hong Kong and San Francisco.

The C40 is a network of 86 of the world’s largest cities committed to fighting climate change. Copenhagen has been part of the C40 since 2009.