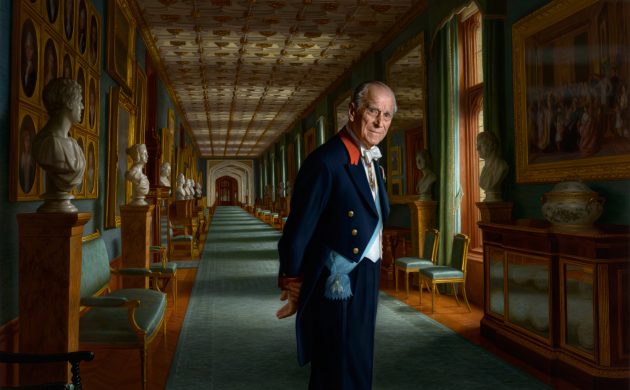 A new portrait of Prince Philip, the 96-year-old husband of Queen Elizabeth II, features him wearing a blue sash denoting his status as a recipient of Denmark’s highest honour, the Order of the Elephant.

Apparently the portrait was commissioned by none other than Queen Margrethe II to mark his recent retirement from official duties.

The royals are distant cousins, as Philip is a great-grandson of Margrethe’s great-great-grandfather Christian IX.

Exhibition opens in May

Accordingly, the portrait will be available to view at the national history museum at Frederiksborg Castle as part of a retrospective of the artist Ralph Heimans.

The exhibition will start on May 25 and continue until September 2, after which the portrait will be moved to the UK.

Kissing cousins?
Meanwhile, Australian gossip mag New Idea is speculating in its latest issue that the  portrait offers ‘proof’ that Philip and Margrethe had an affair.

Philip is 19 years her senior, which might explain why the Netflix series ‘The Crown’ hasn’t covered it yet.

Danish entry fails to make Oscar shortlist
Danish entry ‘Du forsvinder’ (‘You Disappear’) has failed to make it onto the nine-movie shortlist for the Oscar category Best Foreign Language Film. The disappearance of Peter Schønau Fog’s movie from contention marks only the second time in eight years that a Danish film has missed out on the final nine. However, Swedish entry ‘The Square’, a film co-produced by Denmark and starring Danish actor Claes Bang in the lead role, is still in the running. It has also been nominated for a Golden Globe.

Danish woman watched cartoon on Netflix 317 times in 2017
A 19-year-old from Bogense on Funen has drawn disbelief across the country after it was revealed she has seen ‘Bee Movie’, a 2007 DreamWorks animated film, 317 times on Netflix so far this year. It is not uncommon, she told DR, to watch it more than once a day – often in the company of her two brothers aged 8 and 9 – but more often than not she uses it as background to fall asleep to. Her boyfriend, though, finds it a “little strange”.

Reprieve for cancelled satirical DR radio julekalender
Two theatres have joined forces to stage ‘Jul i republikken’, the satirical julekalender radio show pulled by DR at the last minute because it did not live up to its standards. Aveny-T is staging a one-off audio performance at its home in Frederiksberg with help from Mungo Park. The plot involves the royals being abolished and forced to live on a council estate in Amager. The radio show featured rising star Claes Bang (‘The Square’) amongst its cast and he will be among those performing it, along with former Enhedslisten leader Johanne Schmidt Nielsen.

Judas Priest and Ziggy Marley announce concerts
June 2018 is turning into a stellar month for fans of heavy metal. Ozzy Osbourne is headlining Copenhell, Iron Maiden are visiting, and now Judas Priest have confirmed they will be playing Royal Arena on June 10 with Megadeth in support. Tickets start at 370 kroner and go on sale on December 18 at 10:00 at livenation.dk. Also announcing a show next year is Ziggy Marley, who will be calling in at Store Vega on July 25. Tickets again cost 350 kr and likewise go on sale on December 18 at 10:00 at livenation.dk.