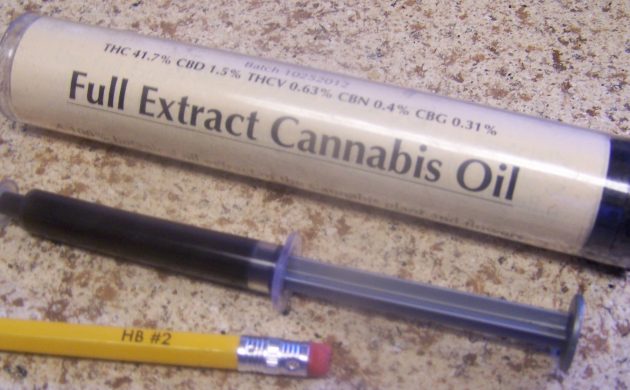 Due to the THC content, this vial is illegal in Denmark (photo: Stephen Charles Thompson)
June 27th, 2017 8:44 am| by Christian W

It seems as if oil derived from hemp plants is become increasingly popular in Denmark, at least according to new figures from the state police and the tax authority SKAT.

The police confiscated almost 1,000 containers of cannabis oil in May and June this year alone – over twice as many as the 408 taken over the whole of 2016.

SKAT backs up the trend, noting that cannabis oil is increasingly making its way into Denmark in packages sent from abroad.

“Specifically cannabis oil is something that has begun turning up more in the last couple of years,” Preben Buchholtz, a deputy head at SKAT’s customs department, told DR Nyheder.

THC zero-tolerance
Cannabis oil is illegal in Denmark unless prescribed by a doctor, as are any products that contain the psychoactive component THC (Tetrahydrocannabinol), the ingredient that makes you high when you smoke pot or hash.

It is very difficult to completely remove THC from cannabis oil, and it is illegal even it contains a minute amount of THC – something that irks the Medicinal Cannabis Association Denmark (MCAD).

“It’s a strange approach to punish people who are ill and have a desperate hope to be soothed by using cannabis. We must end the zero-tolerance regarding THC,” Rikke Jacobsen, a MCAD board member, told DR Nyheder.

Today, general practitioners can prescribe certain forms of medicinal cannabis. Only a few do, but the number is increasing.