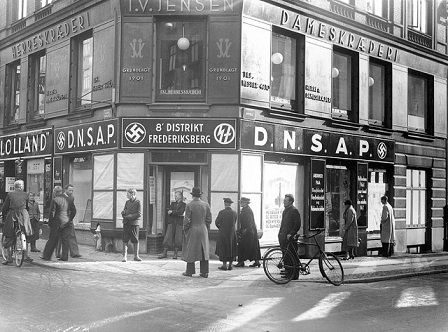 The Nazi Party headquarters in Frederiksberg was situated on Gammel Kongevej (photo: Nationalmuseet)
November 2nd, 2018 10:04 am| by Stephen Gadd

Up until now, it’s been next to impossible to establish who was a member of DNSAP, the Danish Nazi Party, during World War II. Reliable membership lists had long gone out of print, so unless you happened to hit the jackpot in a second-hand bookshop, the chances were virtually nil.

That is now set to change. The association of Danish genealogical researchers, Danske Slægtsforskere, has published part of the so-called Bovrup Archive, a list of the majority of the members of the DNSAP, reports Kristeligt Dagblad.

The archive was started by party leader Frits Clausen, a native of Bovrup, and in 1945 it was copied and published in book form by members of the Danish Resistance who were angry that a lot of ex-Nazis seemed to have escaped punishment.

The original archive contained around 50,000 names, but for some reason the published version only had room for 28,000.

However, since the initial publication the book has been subject to a court injunction and not been publicly available. Historians and other interested parties have had to resort to scouring second-hand bookshops for copies.

Important source material
The head librarian of the genealogical association, Per Andersen, told Kristeligt Dagblad that “over the years, we’ve had a lot of queries from people researching their family trees who wanted to know whether their older relatives were party members. We also feel this is important source material for historians.”

One of the reasons the archive is only being made public now is that Danish data protection laws state that a person should have been dead for at least 10 years before information about them can be revealed. For the same reason, only 5,265 names from the archive will be made public at this time.

Ethical considerations
However, others are concerned there might be ethical problems associated with the publication.

“It’s fine if you want to use the archive for family research, but there is no guarantee the lists won’t be used to publicly pillory people,” said Peter Birkelund, the senior researcher and archivist at the Rigsarkivet national archive.

“When things are published anything can happen. We’ve previously seen examples where people have had to explain themselves because of their family’s connection with the Nazi Party.”