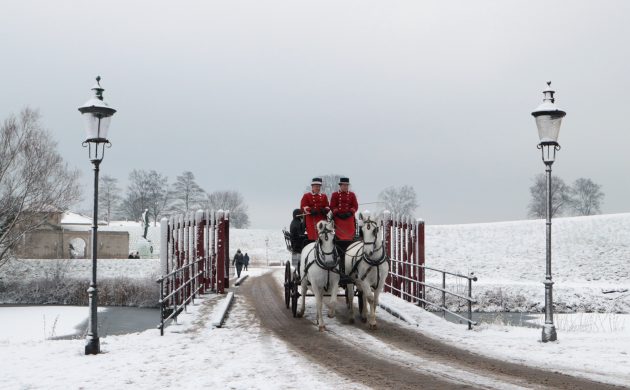 Could be a few more weeks until you resort to carriages (photos: Bev Lloyd Roberts)
November 6th, 2019 5:59 pm| by Ben Hamilton

DMI isn’t great at predicting the weather, but nobody could be as bad as TV2.

On Tuesday night, one of their reporters sighted snow in north Zealand, but then again it could have just been a downpour of dandruff or a splattering of deceased insects, killed mid-flight by the unusually cold temperatures we’ve been experiencing.

On that, we and TV2 can agree, as it’s been unseasonably cold, and we admire the broadcaster’s restraint in not announcing – for the sixth time this decade – that the forthcoming winter will be the coldest of the century.

Reportage in reverse
This morning’s report of yesterday’s weather (isn’t it supposed to be the other way round?) claimed that rainfall turned into sleet and perhaps snow as cold air poured in from the northeast – although there was a discernible element of doubt in the wording.

“Car windows and lawns were therefore stained white – a clear warning that winter is coming,” it noted. “Do you have pictures of the snowy weather?”

So, clearly no evidence then.

From the best non-native speakers of English to #4 in just five years
The Danes are the fourth best non-native speakers of English in the world, according to the latest EF English Proficiency Index rankings. Since topping the rankings in 2014, they have been steadily slipping, and now the Norwegians have crept ahead of them. Meanwhile, at the top, the Dutch have displaced the Swedes. Completing the top ten were Singapore, South Africa (whose inclusion seems a bit strange, although it does have 11 official languages), Finland, Austria, Luxembourg and Germany. Most noticeably, France, Spain, Italy and Latvia were the only European countries deemed to have only a moderate proficiency.

Obese more vulnerable to multiple chronic diseases than smokers
A study of 56,164 Danes aged 45-67 between 2010 and 2018 concludes that being obese is the surest way of opening yourself up to multiple chronic diseases in middle age – and it’s worse than being a regular smoker. The Statens Institut for Folkesundhed health report found that obese people are three times more likely to have multiple illnesses, but smokers only 1.5 times. However, the smoker group had the strongest correlation with premature death. From 2010 to 2017, the proportion of obese adults in Denmark rose from 13.6 to 16.8 percent.

Dane among those wrongfully imprisoned in Norway for social benefit fraud
A Danish woman is among 48 people who have been imprisoned for crimes in connection with their receipt of social benefits in Norway. It turns out the authorities have been misinterpreting EU rules on social benefits (even though it’s not in the EU, it’s been following its rules since 1994) since 2012. The woman in question was sentenced to 11 months in prison and fined 650,000 kroner for “gross fraud” and “false explanation”, and she suffered great hardship whilst serving eight months – and also embarrassment, as she did her best to conceal her imprisonment from anyone outside her family. Although she has been exonerated, she has chosen to keep her name private, reports Berlingske. The Norwegian government and relevant ministry have apologised to all 48 people.

Truffle dog goes beserk in half-hour rampage near Aarhus
A dog from Tgele near Viborg in east Jutland found six truffles in just 30 minutes in a forest near Aarhus on Monday. Asti, who underwent 400 hours of training, only started sniffing out truffles a week ago, and she has already found 23. The truffles are seriously expensive, so that has to be a lifetime’s worth of Pedigree Chum.