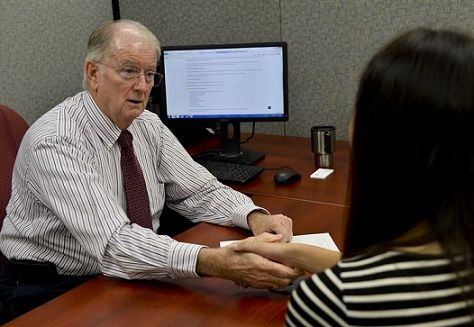 Before paying out her benefits, he will have to thoroughly investigate her work history outside Denmark (photo: US Airforce/Jenay Randolph)
September 25th, 2018 1:57 pm| by Stephen Gadd

If a measure being suggested by Dansk Folkeparti and the government in the budget negotiations becomes law, it will affect more than 100,000 people. It could also end up creating a bureaucratic nightmare, according to the trade union insurance funds who pay out the cash.

The idea is that anyone who is a member of an A-Kasse insurance fund who wishes to apply for benefits will have to have been a legal resident in either Denmark, another EU country or a country in the European Economic Area for seven consecutive years during the last eight, DR Nyheder reports. Exceptions will, however, be made for people employed by Danish firms abroad and seafarers.

Every year, around 16,000 Danish citizens over the age of 18 move back to Denmark after living abroad. The problem is that the A-Kasse in Denmark doesn’t have access to the right data in order to assess the claims, so it will have to apply to the country where the person has worked, which could be a very long and drawn-out process. In the meantime, it will not be able to pay out benefits to claimants.

Mentors ripping off municipalities
Last year, Denmark’s municipalities paid private firms 900 million kroner for supplying mentors to help people who need extra assistance to get back into the job market or out of criminal activity. According to a DR documentary, some companies are submitting vastly inflated bills concerning the hours the mentors are putting in with their clients. One case showed Brøndby Municipality being charged 22,500 kroner for 50 hours of mentoring when the person concerned only saw the mentor for around five hours over six months. According to data collected by LG Insight for DR, more than half of the 56 municipalities taking part in the survey answered that they have had problems with the mentor system and have no documentation for the desired effect. Additionally, 12 municipalities have sacked mentors for irregularities, of which seven state this is directly connected to submitting inflated bills.

Driving licence soon to be an app
According to the Finance Ministry, within the next two years it should be possible to have your driving licence on your smartphone as an app. This would make it the first recognised ID card in Denmark that is fully digital. “It makes good sense because a lot of people already use their mobile to pay bills or check their payslips,” said the minister of innovation, Sophie Løhde. However, the good old plastic driving licence will still be available for those who prefer something tangible in their pocket. The transport minister, Ole Birk Olesen, is also looking into the idea of having driving licence applications digitalised in order to save time, as the manual process of acquiring a licence can drag out.

Spray it, but don’t say it
Daniel Stokholm, the former leader of the far-right Danskernes Parti, has been given a conditional sentence of 30 days, while three other party members have been fined 7,500 kroner each for handing out cans of hairspray with the label ‘asylspray’ (asylum spray) on the tin in Haderslev, reports TV2 Nyheder. The party believes that migrants are a security risk and that they should be expelled from Denmark. They also believe that the use of pepper spray should be legalised. As well as the hairspray ‘happening’, the party also put a video up on the internet with the same message. The four men were all charged with racism and breaking the weapons laws by being in possession of hairspray as a means of self-defence. The party leader was also charged with spreading propaganda. The four intend to appeal.

Aarhus follows Copenhagen’s lead with bicycle superhighway
Back in 2013 a bike superhighway was opened from Farum north of Copenhagen into the city that led to a 61 percent increase in the number of bicycle commuters on the route in three years, figures from COWI reveal. There are now eight bicycle superhighways in Copenhagen Municipality, and Aarhus has also got in on the act, reports TV2 Nyheder. Costing 98 million kroner, a highway has just been opened from the suburb of Lisbjerg via Skejby into the centre of Aarhus. “This is a great way to give people a good alternative to the car in those places where there is congestion. We’re not following the traditional route. Here there’s a light railway, but otherwise you are biking through nature,” said Susanne Krawack from Aarhus Municipality. She hopes that 6,000 people will use the superhighway on a daily basis.

First frost of the year in mid-Jutland
Summer is well and truly receding and autumn is on the way. At about 05:00 today, temperatures had gone down to minus 0.3 degrees at Billund Airport, which is one of the DMI weather service’s official measuring stations, reports TV2 Nyheder. The frost has come early this year as it is usually into October before the first minus temperatures are recorded.