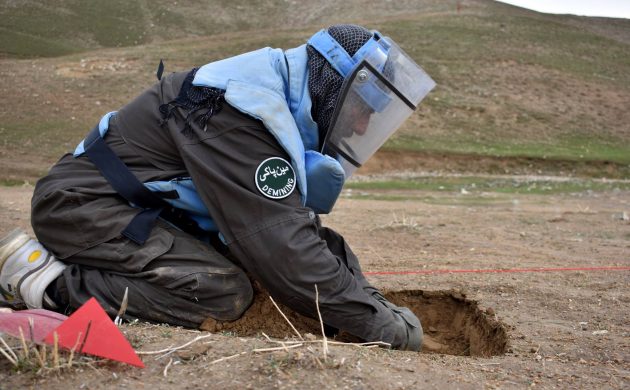 DanChurchAid’s work involved advising the locals on how to disarm live ammunition, such as mines (photo: Danish Demining Group)
October 14th, 2019 10:36 am| by Thess Mostoles

A Danish NGO has ceased its activities in Syria for security reasons following the Turkish offensive in the region.

DanChurchAid (Folkekirkens Nødhjælp) is a member of ACT, an alliance of more than 140 churches and humanitarian organisations working across the globe.

In Syria, DanChurchAid has been involved in, among other projects, reconstructing areas damaged by the war and advising the locals on how to disarm live ammunition, such as mines.

Last week, Turkey initiated military action along the northern border of Syria, claiming it wanted to create a security zone extending 30 km inside the Syrian border. According to the UN, around 100,000 people have fled northeastern Syria as a result.

“I can confirm that we have had to temporarily stop our activities because of the security situation in the country,” explained Jonas Nøddekær, the international director at DanChurchAid, who confirmed there are no Danish emergency workers left in the area.

While other organisations remain in the region, conditions are more difficult now.

The Turkish offensive is targeting Kurdish-controlled areas held by the YPG group. YPG is considered a terrorist movement by Turkey despite playing a large role in the western coalition’s defeat of Islamic State in Syria.

A US withdrawal from the area prompted western politicians to express concern about what this could mean for Syria. The Danish foreign minister, Jeppe Kofod, said Turkey “should hold back in order not to create more war in a country that is so ravaged and where the civilian population has suffered for so many years”.