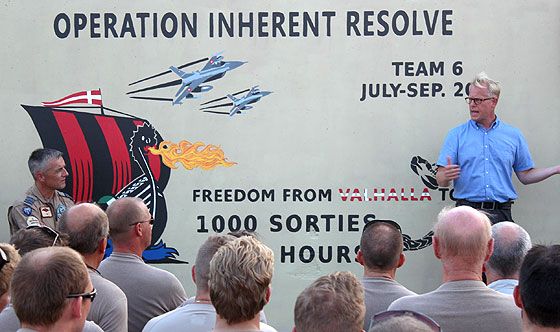 Carl Holst was at hand to heap praise onto the deployed Danish forces (photo: Defence Ministry)
August 26th, 2015 10:43 am| by Christian W

The defence minister, Carl Holst, travelled to Kuwait and Iraq yesterday to visit the Danish troops who are taking part in the coalition’s ongoing efforts against the jihadist organisation Islamic State (IS).

Holst started the day by visiting the Danish F-16 fighter squadron at the Ahmed Al Jaber base in Kuwait, where it has been stationed since October last year. Later that evening, Holst flew to the Al Asad base in Iraq to greet the Danish soldiers who are training the Iraqi security forces to fight IS.

“The Danes deployed in Kuwait have performed, and continue to do so,  extraordinary work in the struggle against IS. They deserve heaps of praise for that,” said Holst.

“And visiting the Danish soldiers at the Al Asad base, experiencing their daily lives in the camp and hearing how the training of the Iraqi security forces is progressing has left a strong impression on me. There is no doubt their efforts are essential to the coalition’s fight against IS.

Military wants a break
Those efforts, however, are wearing down the troops and equipment of the fighter squadron in Kuwait, and according to Peter Bartram, the head of Danish Defence, the squadron is in need of a break for almost a year.

Bartram contended that the supply structure in Denmark is under duress and the Danish fighter jets are old and need a break in order to prepare for future missions.

“While we’ve been deployed, the pilots have put their educations on hold,” Bartram told DR Nyheder.

“The support function is designed for us being deployed for a while and then coming home. Our entire structure and resources are based on that, and it’s natural that we go home to recharge.”

Parliament is expected to extend Denmark’s military efforts – which includes 90 men and seven F-16 fighters in Kuwait and 120 soldiers in Iraq – against IS until sometime next month.

At the end of July, the Danish F-16 mechanics wrote a letter to PM Lars Løkke Rasmussen urging him not to extend the mission in the Middle East because of stress among soldiers, the lack of manpower and cracks in the fighter jets.