 Denmark again the least corrupt country in the world - The Post 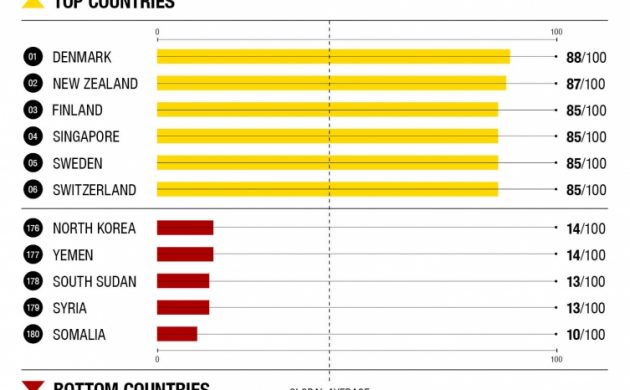 According to Transparency International’s newly-published Corruption Perceptions Index, Denmark has regained its top position when it comes to being the least corrupt country in the world.

The index (see below) ranked the Danes first with a score of 88 out of 100, one point better than last year’s top dog New Zealand and three points better than Finland, Singapore, Sweden and Switzerland. Norway, the Netherlands, Canada and Luxembourg completed the top 10.

But an interesting point of the index was that it singled out Danske Bank’s money laundering scandal as one of the aspects that it did not take into account. Furthermore, Denmark was mentioned as ranking low in terms of exporting corruption overseas.

“Our 2018 Exporting Corruption report showed that most of these countries are failing to investigate and punish companies when they are implicated in paying bribes overseas,” the index report found.

“Of the top seven countries in this year’s CPI, only Norway and Switzerland rank in the highest category of enforcement against foreign bribery. Finland, Denmark and Singapore are in the lowest category, with Sweden and New Zealand conducting moderate and limited enforcement of foreign bribery respectively.”

READ MORE: Denmark in spotlight over non-compliance with anti-corruption measures

Conflict consequences
Countries enduring conflict dominated at the opposite end of the spectrum. Somalia finished bottom with a score of just 10 out of 100, preceded by Syria, South Sudan, Yemen and North Korea.