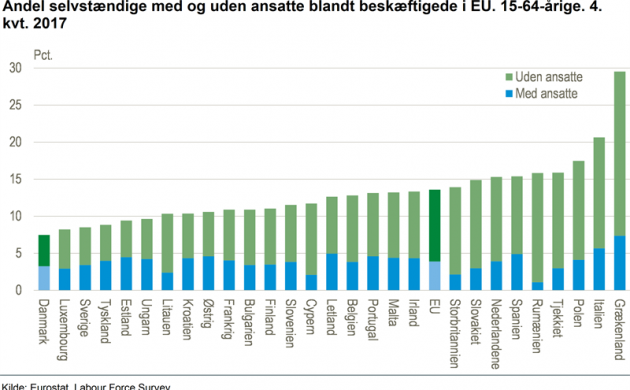 According to new figures from the national statics keepers Danmarks Statistik, Denmark is rock bottom in the EU when it comes to its workforce being self-employed.

The figures (here in Danish) showed that just 7.5 percent of employed Danish people aged 18-64 were self-employed during the fourth quarter of 2017 – which puts the Danes last behind Luxembourg, Sweden and Germany.

Conversely, Denmark was top in the EU with 92.2 percent in terms of people being regular employees, putting them just ahead of the same three countries mentioned above.

High employment frequency
Greece topped the self-employed list with almost 30 percent, followed by Romania, Italy and Poland, while the EU average was 13.6 percent.

Denmark also had one of the highest employment frequency rates in the EU with 74.6 percent – only Sweden, Germany, Estonia and the Netherlands performed better. The EU average was 68.1 percent.

Finally, the Danes were also well ahead of the EU curve when it came to the share of the population being wage-earners with 68.7 percent. Only Sweden and Germany scored higher, and the EU average was at 58.2 percent.

Golden oldies
In related news, a new report from the Internal Affairs Ministry has shown that the number of people over the age of 60 who are working has increased by 163,000 over the past four years.

As of now, almost every third person in Denmark over the age of 60 has a job of some sort.

According to the ministry, the increase in elderly working is down to the gradual increase of the early retirement age.