 Denmark tops social justice in the EU - The Post 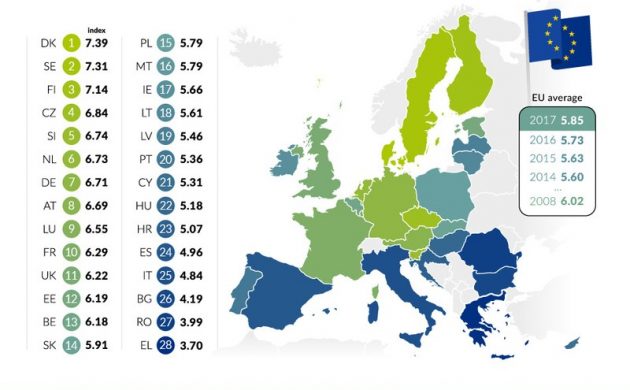 A disparity between north and south (photo: Bertelsmann Stiftung)
November 17th, 2017 8:12 am| by Christian W

According to the latest Social Justice Index, published annually by the German foundation Bertelsmann Stiftung, Denmark is number one in the EU regarding opportunities for social participation.

It was good news for the rest of Europe as well, as the index suggested that social justice was on the rise overall in the EU as the average increased from 5.73 to 5.85 over the past year.

“A discernible upward trend is emerging in the EU in regard to social justice. This improvement in opportunities for social participation is mainly being driven by a marked recovery in the labour markets,” the report found.

“Labour market data has improved year-on-year in 26 of the 28 EU states. The EU’s average unemployment rate fell to 8.7 percent in 2016, having stood at 11 percent in 2013 at the height of the social crisis.”

However, not everything is brilliant. The continent is recovering at vastly differing speeds – the gap between northern and southern Europe remains considerable.

Greece was ranked bottom of the index, followed by Romania, Bulgaria, Italy and Spain – five nations where “an above-average proportion of children and young people remain at risk of poverty and exclusion”.