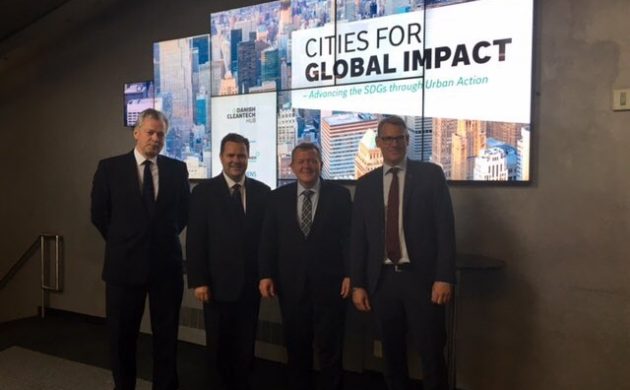 US President Donald Trump may have yanked his country out of the Paris climate agreement, but a number of US cities have rebelled against that decision and are keen to continue a green transition. And now help may be on the way from Denmark.

According to Berlingske newspaper, the Danish PM Lars Løkke Rasmussen will present a new plan today involving 91 US cities – including New York, Chicago, Los Angeles, Houston and San Francisco – and eight other countries who have all voiced an ambition to live up to the climate goals stipulated in the Paris agreement.

“Trump is lacking some American leadership; this is also in the interests of the US. The air we breathe knows no boundaries, as do the climate changes we are experiencing,” Rasmussen told Berlingske.

Boosting co-operation
The initiative, given the name P4G (‘Partnering for Green Growth and the Global Goals 2030’), involves the establishment of a fund initially containing 6 billion kroner that will help underpin green initiatives in the cities that are part of the project.

The plan also involves setting up a climate headquarters in Washington DC, while the group intends to hold a summit at the end of next year.

More specifically, the project aims to enhance co-operation between companies, governments, regions and cities in an effort to promote green growth. The primary focus of the initiative will be on agriculture, food produce, energy, cities, water and economic sustainability.

Funding for the Danish part of the initiative will come from the global goal investment fund (SDG Investment Fund), which contributes about 30 billion kroner towards growth and development looking ahead to 2021.

California dreaming
In related news, Denmark has signed a co-operation agreement with the state of California regarding water technology. The environment minister, Esben Lunde Larsen, was at hand to ink the deal along with Jerry Brown, the governor of California.

The agreement will help Danish companies gain a foothold in a state that not only has a massive economy, but struggles with its water resources.

“The US is a massive market where competition is fierce, so it’s very impressive that Denmark has managed to secure a partnership deal with such significant potential,” said Lars Gert Lose, the Danish ambassador to the US.

“The agreement will raise awareness about Danish water solutions, and as 600 billion dollars of investment is required to maintain the US water infrastructure over the next 20 years, the export potential is immense.”

In California, every citizen uses over twice as much water annually as a Danish citizen and US cleaning plants consume lots of energy compared to sustainable Danish plants.

In 2014, the state approved a financial package worth 52 billion kroner aimed at bettering its water quality, waste water cleansing and mapping its groundwater resources.