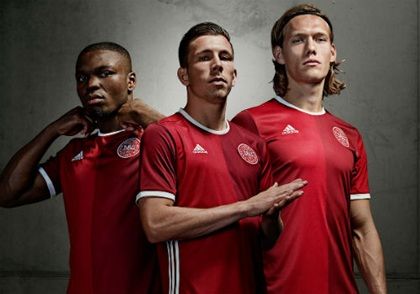 Could the new kit help propel Denmark past the Swedes next Saturday? (photo: DBU)
November 5th, 2015 1:47 pm| by Christian W

When Christian Eriksen, Nicklas Bendtner and the rest of the Danish football team trot out onto the pitch at the Friends Arena stadium in Stockholm next Saturday for their first leg Euro 2016 playoff decider against Sweden, they’ll be doing so wearing a spanking new kit.

The strip, which evokes subtle memories of the legendary Danish 1986 World Cup kit, has a two-tone red front with the classic Adidas triple-stripe running down the side of the kit.

READ MORE: Denmark will face Sweden in playoffs for a place in Euro 2016

On sale today
The shirt has a climacool ventilating effect, the shorts will be red or white depending on the match and opposition, and the socks are also red.

The classic DBU logo is stitched on the left side of the chest, while ‘En Del af Noget Større’ is written on the nape of the shirt.

The new kit is the seventh of its kind since Adidas became Denmark’s technical sponsor in 2004, and it can be purchased from today at all Sportmaster shops (get it online here) for a price of 650 kroner.