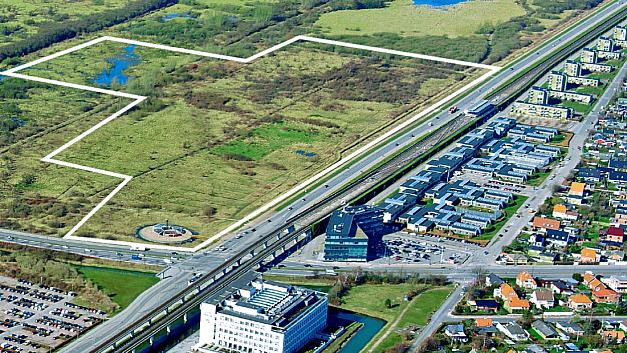 The marked area shows where the new neighbourhood will be located (photo: By&Havn)
September 12th, 2016 4:59 pm| by Lucie Rychla

City and port developers By & Havn have revealed their plans for Amager Fælled, the urban nature area in south Copenhagen.

A 40-hectare large, green zone near the Sundby metro station will be transformed into a new neighbourhood with several 7-storey apartment buildings offering 2,000-3,000 housing units, as well as with shops, supermarkets, parking and daycare centres.

Construction companies are currently submitting their project proposals and By & Havn hope that construction work will commence in 2017-2018 and that the first residents will be able to move in two years later.

Campsite and tunnel
Meanwhile, there are also plans for a new modern campsite that will be located next to the existing Danhostel Amager and across from the Bella Center.

However, this project is still waiting for an official approval.

Copenhagen and the Danish state are furthermore planning to build a tunnel that would run from Nordhavn, under the harbour, Refshaleøen, Amager Fælled and then connect with Sjællands bridge in Sydhavn.

The 12-km-long tunnel is expected to divert 70,000 cars away from the city centre.

A feasibility study has already been initiated and the state is seeking to allocate the necessary funding.