 Electric scooter injuries in Copenhagen: over a hundred and counting! - The Post 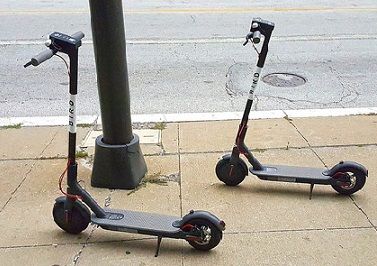 It was the story the Danish media have been fighting for, jostling for pole position on the capital’s cycle lanes: electric scooters are dangerous.

Braking at breakneck speed to take the honours is Berlingske, which has reported a Capital Region release confirming there have been 100 “scooter-related injuries” this year.

Pedestrians among the casualties
The Capital Region figures are based on hospital visits, so presumably the actual number of injuries is much higher.

Most of the injuries were suffered to the face and head – hence the need to visit a hospital. And a third of the accidents were alcohol-related.

Stig Nikolaj Blomberg, a researcher at the Akutberedskabet emergency preparedness unit at the Capital Region, revealed there were some “quite serious injuries”.

Among those injured were several pedestrians, although it sounds like most of them tripped over discarded scooters. Only one ended up in hospital after being hit by one.

Speed limit and alco-locks?
Blomberg contends that the figures prove that heavy restrictions are needed in the future.

Concerns have already been voiced that it is hard for scooter-riders to observe cycling rules, such as signalling to turn or stop because it is dangerous to drive with only one hand on the handle.

She has recommended a 6 km/h speed limit in certain parts of Copenhagen and for alco-locks – a device that users must blow into to activate the scooter – to be fitted.