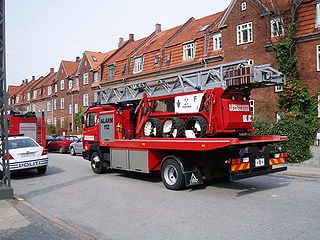 Copenhagen firefighters were called into action by a major fire yesterday (photo: EBO)
May 4th, 2015 9:55 am| by Ray W

An apartment fire in Copenhagen has claimed one victim and left four firefighters injured.

According to witnesses, there were a number of explosions as a heavy fire broke out in the apartment building on Jagtvej in Østerbro at 11:12 yesterday morning.

Witnesses claim the explosions were possibly caused by oxygen tanks used by one of the residents of the complex.

None of the firemen were seriously injured.

Still investigating
Copenhagen firefighters have yet to release many details, but witnesses claim the explosions were quite violent.

“There was a violent explosion that shook windows hundreds of metres away,” a witness told Ekstra Bladet. “Shortly after that, white smoke began rising from the site.”

The investigation into the cause is continuing.