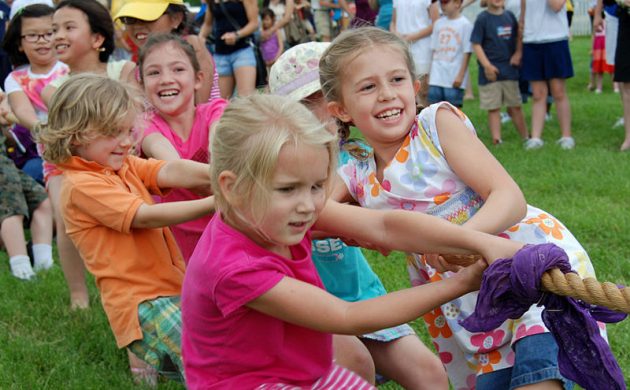 They might not be strong, but when there are five of them for every adult, it can be quite galling losing to the little people (photo: Virginia State Parks staff)
August 7th, 2017 5:34 pm| by Ben Hamilton

I don’t often speak English at my children’s school. But this time I made an exception, because there was no way the adults were going to lose to the kids in the annual tug of war contest in the schoolyard, which sees around 40-plus seven-year-olds take on approximately ten adults.

Beating the little people
“We’re not losing to the little people!” I ventured in my best sarf London warcry, filling the Vesterbro air with expletives as I leant back and pulled with all my might.

Of course, tug of war needn’t be about just beating children as adult teams will be pitting their best pulling skills against each other at ‘Tug of War: Battle of the Bars’ at the CSR Rugby Pitches from 12:00 on August 13.

All you need to do is stand up, grab a rope and lean a little. Basically, everyone is eligible to compete.

READ MORE: At Copenhagen’s cannonball championships, mass is an asset

Pulling pints and ropes
With six days until the big heave-off, there’s plenty of time to get involved and get some last-minute training in, and conveniently that can be combined with trading the armchair in your palace with one in the pub.

Most of the city’s Irish pubs (the Dubliner, the Globe, Kennedy’s and more) are putting in a team (or two) and selection could be cunningly combined with a few swift pints (and pies) – a kilo or two that might prove to be the difference once the serious pulling starts.

Each bar, along with a few other organisations with international ties such as Copenhagen Celtic football club, will be entering a team of eight that must include at least one woman. The rules are simple: pull the rope and your opposition until you have taken them past the marker. Most bouts are best of three.

There will also be a children’s tournament to give them a taste of the sport – beyond beating the adults in the schoolyard – as well as a bouncy castle to relax those aching limbs.

All for a good cause
While entry is free to both competitors and spectators, there will be a number of stands selling drinks and food from which all the proceeds are being donated to the Danish Cancer Society, so those in attendance are urged to dig into their pockets for a good cause.

A Carlsberg Bar will be open all day, as well as a BBQ (weather-permitting) serving all manner of carnivorous delights.

So come along to the CSR Rugby Pitches, which are just around the corner from the old Noma, and enjoy some serious horsepower on display.

It’s like sumo wrestling, but pulling not pushing, and fortunately less flesh on display. 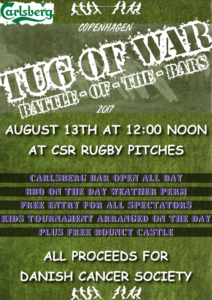 Tug of War: Battle of the Bars