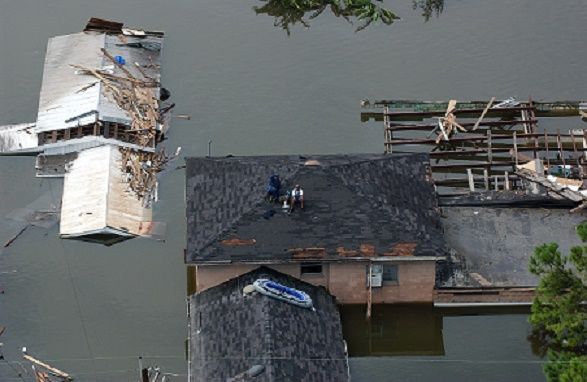 It’s not quite as bad as this yet in Denmark, but we need to be prepared for the worst (photo: Jocelyn Augustino/FEMA)
August 23rd, 2017 5:00 pm| by Stephen Gadd

In the last few years, Denmark has been increasingly hit by cloudbursts, flooding and extreme weather, often to the detriment of home-owners, companies and institutions.

The government has now decided to set aside 27.2 million kroner in the upcoming budget to compile a nationwide ‘atlas’ that will enable people to better prepare for these events.

A sort of crystal ball
“The climate atlas works like a climatic crystal ball and provides valuable insight into where and how often the country will be hit by storm surges and extremely heavy rain,” said energy and climate minister, Lars Christian Lilleholt.

“It means that to a far greater extent, we will be able to take precautions to avoid flooded cellars, and it will help when the municipality needs to climate-proof the building of a new road or school.”

The minister also said that the information provided by the atlas would help to create security in the future and substantially reduce the risk of investing public money badly in schemes that might be affected by climate change.

Better than seaweed …
The atlas will gather data on changes in the weather at a municipal level and include predictions of changes to temperature, precipitation and sea levels both on an everyday level and also to cover freak weather events.

The Danish Meteorological Institute (DMI) will compile the atlas based on its own data and input from the UN Global Climate Report that is published every five years.

“Despite international efforts to minimise global warming, extreme weather will be part of our lives in future. We will have to adapt our houses, sewers, roads and future building projects accordingly, and this is where the climate atlas plays an important role” said Lilleholt.