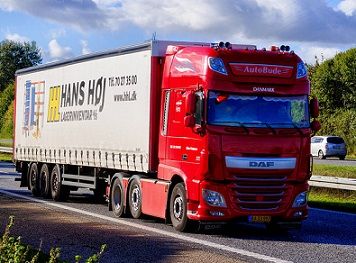 The government wants lorries to keep on truckin’ at even higher speeds (photo: Lav Ulv/Flickr)
March 14th, 2019 9:30 am| by Stephen Gadd

Later today a proposal from the transport minister, Ole Birk Olesen, goes before Parliament that would allow lorries to go 80 km per hour on roads outside built-up areas and on motorways. That is an increase of 10 km per hour on the current limit.

Dansk Folkeparti has said that it backs the idea.

Faster and cheaper
Supporters of the proposal argue that it would aid growth because it would cut transport times.

However, a number of organisations are critical – amongst them are the police, the traffic safety body Rådet for Sikker Trafik and the Technical University of Denmark’s transport department.

Although it may be that increased speed could lead to fewer hazardous overtaking manoeuvres, there may still be an overall negative effect on traffic.

Keep to present limits
“It is a problem when you increase speed. It is the major factor when it comes to accidents,” Mogens Kjærgaard Møller, the head of the traffic safety body, told DR Nyheder.

“If you allow a large, heavy vehicle such as a lorry to speed up over a number of stretches of road, the risk of accidents is of course greater. That’s obvious,” he added.

The Vejdirektoratet road authority has estimated there could be a potential economic gain of around 560 million kroner annually, but the road safety organisation points out that there are costs involved with increased numbers of accidents resulting in injury or death.