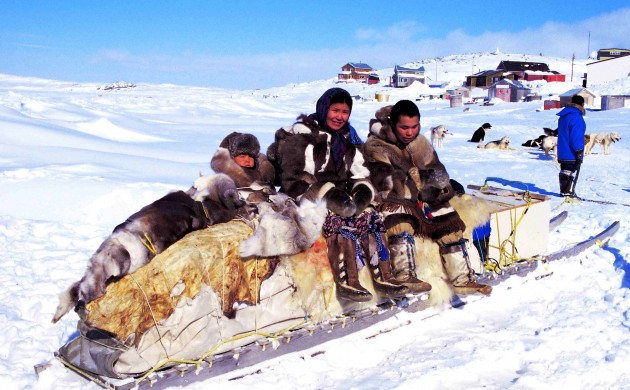 Native Greenlanders have managed to hold onto some of their culture (photo: Ansgar Walk)
May 9th, 2016 1:55 pm| by Ray W

Greenlandic Inuits, the country’s native people, experience many of the same health and social issues as other indigenous peoples like the Aborigines in Australia and Sami in Sweden and 5,000 other indigenous populations listed by the UN around the world.

A new study by a scientific journal, the Lancet, has collected information on the health and social conditions of 28 of those indigenous groups’ health and social conditions. The welfare of the natural population is compared to that of the colonial power that took control of their countries: Greenlanders are compared to Danes, Aboriginals to Australians and the Canadian Inuit to Canadians.

Natives fare poorly
When compared to their colonial masters, the indigenous peoples, including Greenlanders, have a lower life expectancy, higher infant mortality, more children with either too high or too low a birth weight, more women who die in childbirth, more overweight children and adults, a lower level of education and poor economic conditions.

Although the data generally showed that Greenland’s population suffers from some of the same problems as other indigenous peoples, they are doing well in several key areas.

“Greenlanders have home rule and healthcare that they are responsible for, but it will take a while before they get on a par with Denmark,” Peter Bjerregaard, one of the researchers contributing to the Lancet article, told videnskab.dk. “It is not something you accomplish in 5-10 years.”

Social trauma
The article said that Greenlandic Inuits are still suffering from the ‘social trauma’ of seeing their country taken over and managed by Denmark.

“Many Greenlanders regarded themselves as spectators to the developments that happened, and it led to various forms of apathy,” said Birger Poppel, a researcher from Greenland University.

Social trauma has been identified as one of the main reasons for the high alcohol consumption among indigenous Greenlanders, although consumption has been steadily falling of late thanks to focused efforts.

“Some of the things that happened in the 1950s surely influenced Greenlandic mentally,” said Jens Dahl, a professor at the Danish Institute for Cross-Cultural and Regional Studies at the University of Copenhagen.

“Social trauma is a common feature of many indigenous peoples and is reflected in things like the high suicide rates among the Inuit in Greenland and the rest of the Arctic.”

“The way Greenland earned its autonomy cannot be copied by indigenous peoples elsewhere in the world, but it is often seen as a kind of ideal model, he said.

“Things have gone much better for Greenlanders, including economically, than for many other indigenous peoples.”

Doctors needed
Gert Mulvad, a doctor in Greenland’s capital Nuuk, said that the study results bore out his real-world experience.

“The article supports what we already knew, stressing that the situation must be taken seriously,” he said. “We are on the right track in Greenland, but it is not easy to find the right triggers.”

Infant mortality in Greenland has fallen over recent years, and alcohol consumption has decreased to be on a par with the rest of the Danish population.

Even though Greenland has been responsible for its own healthcare since 1992, the majority of doctors in Greenland are still Danes.

“Doctors from Denmark are only here temporarily, and then they go back home taking their knowledge with them,” said Mulvad. “There needs to be more local knowledge.”

READ MORE: Have you ever been “drunk as a Dane?”

More nurses coming onboard
Mulvad said that Greenland was on the right track when it came to nurses, with 50 percent of the countries nursing corp coming from a Greenlandic background.

“It means a lot, because they understand that Inuit health problems are often due to poor housing conditions, to their history and their life situations,” said Mulvad.