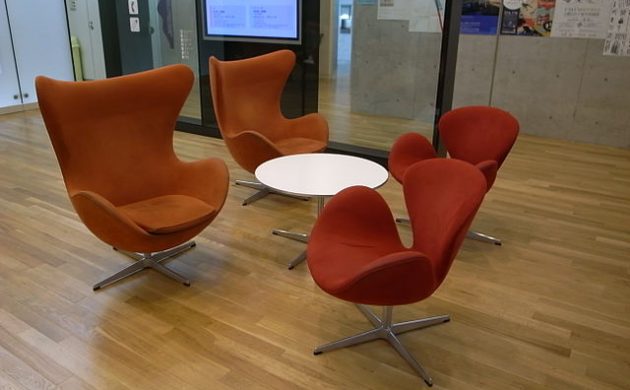 Jacobsen’s ‘swan’ and ‘egg’ chairs could be part of a potential insurance fraud (photo: Wikimedia/Mavis)
March 22nd, 2017 10:04 am| by Stephen Gadd

As recently as 2016, Denmark came out top in Transparency International’s poll to identify the least corrupt nation in the world.

However, it appears that Danes do not view all porkies as corruption – especially the ones to their insurance company in order to claim cash back.

Metroxpress reports that in 2015 alone, insurance companies identified fraud amounting to 488 million kroner. This is the largest amount since 2009 when statistics were first collected, and it seems as if the trend continued into 2016.

It’s a full time job
Several of the larger insurance companies have had a busy year in their anti-fraud investigation departments. Tryg alone has uncovered fraud amounting to around 100 million kroner – up almost 30 million kroner on the year before. Tryg has 12 investigators working full-time on fraud.

“Fortunately, it is not our impression that Danes are trying to defraud more than hitherto; rather, that we have become much better at exposing fraud and are focusing much more on it,” said Jesper Dall, the head of Tryg’s fraud investigation department.

The fraud cases themselves range from people claiming for non-existent items or putting down more items than were actually stolen to reporting diminished bodily functions after an accident or, in extreme cases, even self-mutilation in order to claim medical insurance.

Oddly enough, iPhones and other computer equipment tend to be stolen just at the point when Apple releases a new model, and designer lamps and furniture are also high on the list of ‘stolen’ items.

Footloose and fancy-free
One of the more bizarre cases reported was of a 44-year-old man who deliberately had his foot crushed under a train in Latvia. He then tried to claim 12.4 million kroner from Tryg, Top Danmark and Gjensidige Forsikring. However, video footage from the track showed that the man had deliberately put his foot on the track.

Glostrup court ruled in favour of the insurance company and dismissed the man’s claim for damages. It also transpired that the man, who had taken an early pension, had spent a suspiciously high amount of money insuring himself. Back in 2000 he received 9 million kroner in compensation for losing an arm in an accident with a circular saw.

On a more down-to-earth level, a man reported a theft from his garage and that he has lost a child’s pram, an outboard motor and a number of tools. To substantiate his claim, he sent pictures to the insurance company as documentation. However, the company noticed that most of the pictures had been taken the day before the alleged theft and two of them had even been taken after the event. Shortly afterwards, the police found the ‘missing’ effects at the man’s house. The insurance company was able to save around 39,000 kroner in this case.