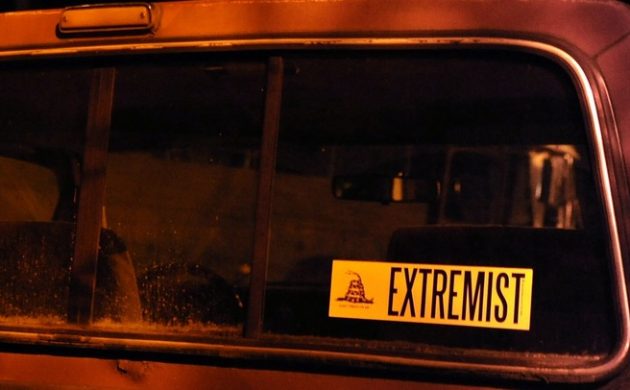 This guy planned for more than just a sticker (photo: Wonderlane, Flickr)
November 30th, 2019 5:31 am| by Valmira Gjoni

The data was extracted from the right-wing forum Iron March, which has been closed since 2017. The American man in question is the founding member of the neo-Nazi group AtomWaffen Division.

The Dane operated under the pseudonym Anti-Gay and is allegedly from Aalborg. He contacted the American man known as Odin in August 2016 and asked for advice on starting a Danish group akin to theirs.

“Some of us Danes on the forum are starting a new group inspired by AtomWaffen” he wrote in his first message.

AtomWaffen, established in 2015, has been linked to five killings. Its members have openly called for violence and terrorist acts. A recent case was the murder of a gay and Jewish 19-year-old man, Blaze Bernstein, who was stabbed to death.

Outside the forum, Odin is 22-year-old Brandon Russell – currently jailed under charges of possessing homemade explosives found in his house in 2018.

Researchers of political extremism raised concerns about the Danish connection.

A trial in absentia would be contrary to the European Convention on Human Rights and Danish law, said KU law professor Eva Smith to DR.

Two Danish foreign fighters had their citizenship revoked under a new emergency law targeting people suspected of an affiliation to Islamic State. They’ll find it difficult to be present in court as their passports are invalidated.

Since the convicted persons cannot be in the courtroom to answer charges brought against them, their attorneys will have to be there on their behalf. This will make it difficult for the court to assess their credibility, according to Smith.

In fact, Danish law states that “the court determines how the person who has been deprived of their Danish citizenship in accordance with section 8B (3), in the event that they reside abroad, will be given the opportunity to speak before the court.”

Denmark to be sued for selling cheese using the name ‘feta’

According to the European Commission, Denmark has done little to curb the production of feta cheese.

Denmark found itself in the European court due to the continuation of the production and distribution of white cheese under the name feta. According to the European Commission, Danish cheese producers have illegally marketed and sold white cheese under the name ‘feta’ to non-EU countries such as Saudi Arabia, all the while aware of the legislation.

Since 2002, feta cheese has been a product with a protected designation of origin in the European Union. This means that, according to EU legislation, only cheese produced in a traditional way, in particular areas of Greece, can be sold using the name feta.

Danish minister for food Mogens Jensen told DR that it’s important for him to protect Danish jobs and export, while he also believes that Denmark should comply with EU rules and regulations.

EU parliament declared a global climate and environmental emergency by a large majority of votes on Thursday November 28, setting climate up as a top priority for its new commission.

During a plenary in Strasbourg, the climate declaration was approved by 429 votes in favour, 225 against and 19 abstaining. This urges the new commission to ensure a green deal with the goal to ratchet global warming down to 1.5 °C.

EU MEPs called for reductions in aviation and shipping emissions, more financial contribution to the international Green Climate Fund, and that EU countries eliminate all direct and indirect fossil fuel subsidies by 2020.

The EU commission also proposed that all EU countries commit to a net-zero greenhouse by 2050 and promised to have a complete climate plan ready in a hundred days time.