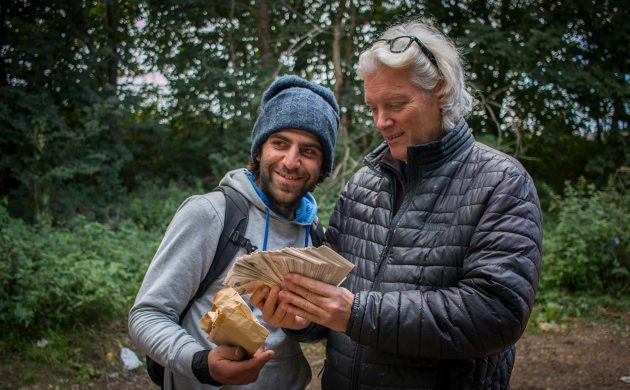 The artist has made a career out of showing how much of ourselves we are prepared to sell for money (photo: hornslethhomelesstracker.com)
October 26th, 2017 6:00 pm| by Ben Hamilton

Kristian von Hornsleth would appear to be making progress with his controversial conceptual art project, ‘The Hornsleth Homeless Tracker’ (HHT), which sells homeless people in London as if they were a real-life Pokémon Go or, as the artist describes them, a ‘Tramp-agotchi’.

So far the Danish artist has sold two of his exclusive gold accounts, which grants the buyer exclusive access to a homeless person’s movements via a tracking device, along with a gold-plated portrait of the subject. The homeless person in each case received half the proceeds.

As the news clips contained in the video below suggest, the controversial project is drumming up plenty of publicity.

With affordability in mind perhaps, the HHT website has just confirmed the availability of 100 silver accounts, although there are few details regarding price and package, or of a date for an exhibition related to the project.

In 2006, he courted controversy with a similar initiative in which he also paid impoverished people – this time 100 Ugandan villagers to legally change their names to ‘Hornsleth’ in exchange for livestock animals.

“The art reveals the society; the public may show great compassion, or merely prove, we only want to watch not interact. Or maybe, it shows that some people just need a Tramp-agotchi,” contended the artist.