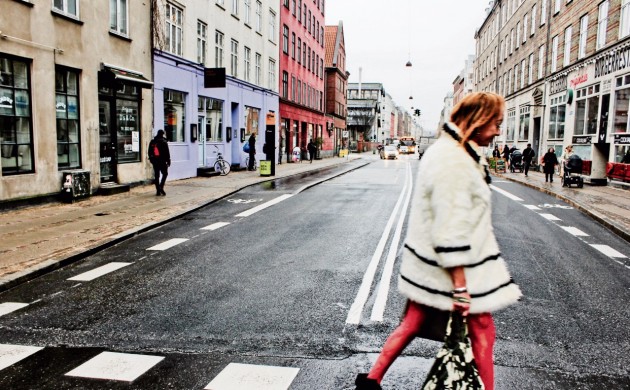 Istedgade in Vesterbro, which runs from the Central Station to Enghavevej, is the home of Copenhagen’s red light district. Since June, excavators and workers had blocked off the grimier end of the road, between Gasværksvej and Reventlowsgade. But at the onset of this month, the barriers came down to reveal a much-changed road.

The street’s revamp is intended to keep cars away and instead lead vehicular traffic to Vesterbrogade, Ingerslevgade or Sønder Boulevard, said the head of the building project, Peter Henrik Johannessen.

“We want to get rid of all the cars that pass through and lead them to roads that are better built for heavy traffic,” he said. “We hope that the combination of narrow roads and reduced speed limits will make cars want to find another, faster way through the city.”

READ MORE: Feeling the vibrations on the street that never sleeps

Not another fast lane
The renovation was originally part of the city’s plan to improve its streets for cyclists, but the project was changed after locals protested against turning the street into a fast lane through the neighbourhood. There are bike lanes near bus stops and traffic lights, but cyclists are no longer a top priority like in the rest of the city.

Instead, the speed limit for cars has been reduced to 30 km/h and broader pavements, punctuated by three-car parking spaces, have narrowed the street. The plan is that flat-top speed bumps will force cars to drive at the same speed as cyclists. It is hoped that the slower traffic flow will reduce the amount of cars passing through the street and make it a much safer and quieter place to be.

“Ninety-five percent of the people who come to shop on Istedgade travel by foot or bike, so we have to design the street to make it easier for cyclists and pedestrians to navigate,” Johannnessen said. “The new pavement is on the same level as the road, making it much safer for the elderly and disabled to cross the road.”

A part of the makeover is to make areas where pedestrians, cyclists, cars and public transport are mixed together and share the same space. However, Johannessen acknowledged that the shared spaces are a bit of a gamble, and that no-one can be sure if it will actually reduce the number of speeding cars.

“We have seen this concept work in other places, but of course we can’t be sure that it will work here,” he said. “After all, there is no street like Istedgade.”

“I think every obstacle deteriorates traffic,” Jarlov said. “They are making it harder to drive through the city’s main roads when they should be making it easier. Conditions keep getting worse for residents, companies and business owners who need cars.”

Jarlov sees the Istedgade project as a clear example of the city harassing car owners while catering to cyclists and pedestrians.

“I have to say that I have a hard time seeing what problems a broader pavement is going to solve,” he said. “There was already a pavement. The renovation is just making things more complicated for car owners who have as much right to be there as anyone else.”
But Johannessen stands by the project’s aim to get traffic away from the street.

“I think it was absolutely necessary to reduce traffic. People here speed as if the cars are stolen,” he said. “Since there are kids using the street, we have to lower the speed limits and reduce traffic.”

Renovation isn’t over yet
The flat-top speed bumps cannot be built before spring when the weather gets warmer. Trees will align parts of the street and newly designed street lamps dubbed ‘Istedlampen’ (The Isted lamp) situated along the road may cast some light on the shady business taking place on the street corners.

Next summer, the rest of the street from Gasværksvej to Enghave Plads will go through the same transformation.