 Lost in translation: interpreters again in the spotlight over serious errors - The Post 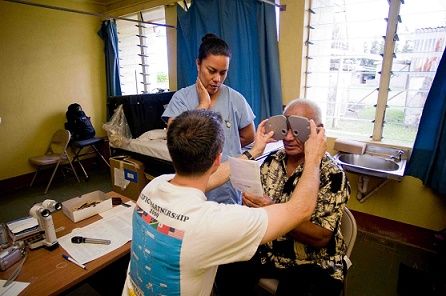 It is important to get things right when you don’t speak the language and need medical treatment (photo: US Navy)
March 21st, 2018 10:48 am| by Stephen Gadd

A new and critical report from the Danish national auditor Rigsrevisionen has drawn attention to serious deficiencies among interpreters employed by a number of government bodies, including the police and the health sector.

The use of interpreters in the public sector is on the rise, and in 2016 expenses for interpreters totalled 305 million kroner in the judicial, asylum and health sectors, reports DR Nyheder.

Can’t make head or tail of it
Danish police forces are obliged to use interpreters chosen from an approved list, but the report shows the majority of them don’t satisfy the criteria laid down by the Justice Ministry.

Among other things, the ministry stipulates that interpreters ought to have a long academic education in linguistics or speak the language as their mother tongue – as well as being able to speak and write Danish fluently.

In practice, the burden of evaluating an interpreter’s capabilities falls on the ordinary police officer who is unable to speak the language in question, and that is obviously absurd.

“It’s completely unacceptable that we have a system in which the quality control of interpreters is handed over to a body such as the police force who are quite obviously not up to the task,” said associate professor Tina Paulsen, an expert on interpreters at Aarhus University.

Data in the report shows that in the health sector, almost every fourth employee has experienced a situation in which a course of treatment or examination has been postponed or delayed because of either a lack of or inadequate interpreters.

Then there are the potential health risks. One patient ended up with diarrhoea after drinking olive oil because an interpreter translated a dietary plan incorrectly.

A waste of public money
“It’s not only a question of foreigners’ rights as patients or in the eyes of the law, but also a question of taxpayer money,” she added.

A consultation with a GP is estimated to cost 1,815 kroner, a hospital consultation 1,000 kroner and a hospital bed 3,628 kroner. If these are scheduled and missed due to linguistic misunderstandings, the state ends up paying the bill.

And costs in the judicial sector are even higher. If an interpreter does not turn up to a court hearing it has to be rescheduled if another interpreter is not available. Costs incurred from a typical criminal case are estimated in the report at around 10,500 kroner per day, and a lawyer assigned to a defendant charges 15,000 kroner per day.