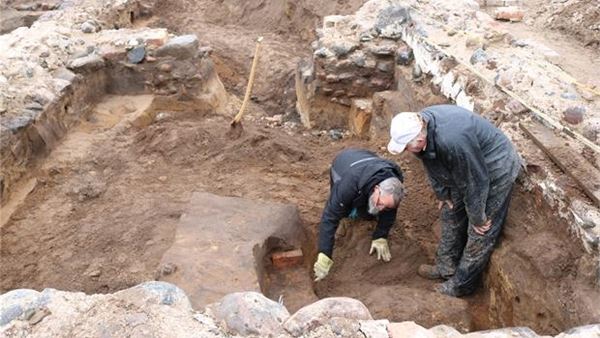 A child’s grave was found where the altar once stood at a north Jutland church (photo: National Museum)
October 21st, 2015 4:55 pm| by Ray W

As the final sections of the Mårup church at Lønstrup Klint in north Jutland are moved due to sea erosion, the relocation is turning up exciting archaeological finds.

The latest is a child’s grave discovered under the altar of the church.

“This is special and we consider it a very exciting find,” National Museum archaeologist Henriette Rensbro, who is heading up the excavation of the church’s foundation, told DR Nyheder.

The gravesite cannot be immediately dated, but evidence points to it being an early medieval grave, perhaps from the time of the church’s construction in the 1200s.

Rensbro said the child probably came from a wealthy family.

“It is more special to be buried inside the church, and there is no doubt that it is important the child was buried under the altar,” said Rensbro.

Hungry seas
The National Museum will now compare the north Jutland burial ground with findings from other European churches to see if they can help date the find.

The Mårup church has been being disassembled and moved in stages since 2008 as the seas erodes the land around it and comes closer and closer.

When the church was built in the 1200s, it was about two kilometres from the edge of the cliff. When the last stone was moved last month, the distance to the sea was only a few metres.

The National Museum used drones to photograph the bluffs north of the church this week hoping that the images would reveal graves dated before the buildings were constructed in the 13th century.